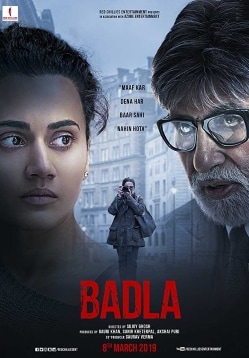 Amitabh Bachchan and Taapsee Pannu were showered with all praises for their powerful performances in Shoojit Sircar's 'Pink'. The 'Pink' co-stars Amitabh Bachchan and Taapsee Pannu will be seen together for the Sujoy Ghosh's new film "Badla" which is a much-waited Bollywood movie. It features Amitabh Bachchan, Taapsee Pannu and Amrita Singh in the lead roles. Tony Luke, Manav Kaul, Tanveer Ghani and Denzil Smith will be in the supporting roles taking the movie forward. Badla is an official remake of the Spanish thriller film "Contratiempo (The Invisible Guest)" released earlier in 2016. The movie has released across India on 8th March 2019. Watch out the Badla official trailer and tell us how excited you are to watch the movie. Wait no more to book the movie ticket online for the Badla movie on BookMyShow, Paytm, Amazon Pay and more at much more affordable prices. 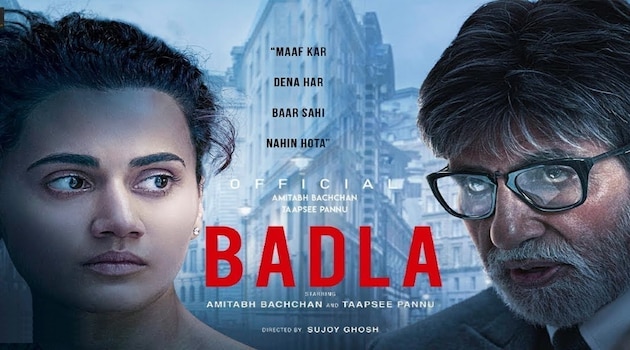 Taapsee Pannu as Naina is an ambitious entrepreneur who is also a suspect of the murder of a young photographer with whom she shared an intimate relationship. Amitabh Bachchan, as Badal Gupta the lawyer wants Naina to speak the minute details of the incident and he shall believe her blindly as he wants nothing but the truth. Taapssee is an unreliable narrator and a fascinating suspect, who is smart, ambitious and powerful. The movie largely rests on Amitabh and Taapsee's shoulders. Amrita Singh's steely determination adds that extra essence to grope attention all way through. The twists and turns are something which keeps you glued to the movie. Well, half-way through you can predict the big suspense. The crisp pace of the movie and hard-working cast have pulled their parts effortlessly and you can feel this while watching the movie. Badla is a respectable seldom thriller which remains engaging till the end, after all, Sujoy Ghosh knows his craft with utmost perfection.

The music of the Badla movie is composed by Amaal Mallik, Anupam Roy and Clinton Cerejo and the lyrics are penned by Kumaar, Siddhant Kaushal, A. M. Turaz, Manoj Yadav, Anupam Roy and Jizzy. The movie has a song "Aukat" rapped by Amitabh Bachchan. Mr Bachchan got inspired by Ranveer Singh's Gully Boy released earlier this year.