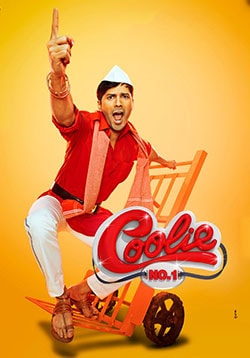 About Coolie No.1 Movie

Coolie No. 1 remake news can bring that wide smile on the David Dhawan fan's as Senior Dhawan sir is soon to start with the remake of Coolie No. 1 from the 90's era which has Govinda and Karisma in the lead roles in their comedy-drama flick. The remake of Coolie No. 1 will have Sara Ali Khan and Varun Dhawan in the lead roles. The film also stars Paresh Rawal, Johnny Lever, Sahil Vaid, Jaaved Jaaferi, Rajpal Yadav and Shikha Talsania in the supporting roles, and this showcases that the movie has the ace actors that can give you a rib-cracking joyous ride. Farhad Samji being the writer has maintained the essence of the 90's Coolie No.1 and has been written in a way that it does not sound illogical to the audiences. We're all super-excited as the movie Coolie No.1 have released on 25th December 2020 on Christmas eve and was premiered worldwide on Amazon Prime Video.

In the below story you shall find the major highlights of the Coolie No.1 movie that are the trailer, review, songs, and other info, scroll down to have a glimpse. 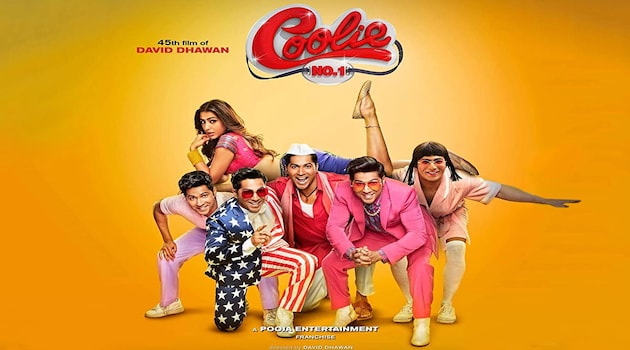 Coolie No. 1 is the modern remake of the 1995 Govinda starrer blockbuster film of the same name. Varun Dhawan as Raju has done an over the top work with his acting which, honestly, wasn’t required at all. For some strange reason, the colour of Varun’s skin keeps changing (we are still trying to decode that!). Sara Ali Khan as Sarah is all glamorous in the film but she definitely needs to work a lot on her comic timing. The comic timing of Johnny Lever, Rajpal Yadav and Jaaved Jaafferi does save the audience from leaving the screen which should be a relief for director David Dhawan. The songs are also re-made from the older film thanks to no creativity and Tanishk Bagchi. The screenplay is also the same as the 1995 film just a glamorous version of the previous one.

Overall, this version of Coolie No. 1 is just a chic, stylish and fashionable version of the 1995 film with lots of over-the-top acting.

Watch this laugh riot on Amazon Prime at your comfort on a smartphone or smart TV. Watch Coolie No. 1 full movie online in HD online and get ready to enjoy the remake in the new version of modern times.

The music of the Coolie No.1 movie is composed by Tanishk Bagchi, Javed - Mohsin and Lijo George  DJ Chetas while the lyrics of the songs are penned by Sameer Anjaan, Shabbir Ahmed, Danish Sabri, Rashmi Virag and Ikka. All the tracks of the movie are great and shall groove you to its beats, take a look below.