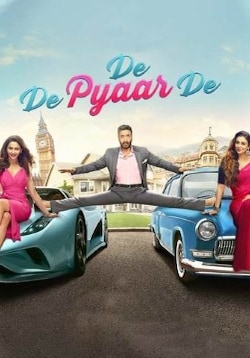 De De Pyaar De is a Bollywood romantic comedy drama which is written and co-produced by Luv Ranjan. With this movie, director Akiv Ali is going to make his directorial debut. The movie features Ajay Devgn, Tabu and Rakul Preet Singh in the lead roles. This movie is a quirly take on the urban relationships where a 50-year old father faces disapproval from his family, son and ex-wife and eventually falls in love with a chirpy and self-dependant 26-year old girl who is full of life and can't compromise on alcohol. Earlier De De Pyar De was scheduled to release on 15th March 2019, but to avoid the clash with the Ajay Devgn's movie Total Dhamal the date of the release was postponed to 17th May 2019. Stay tuned to watch this rom-com has already hit the cinema halls. 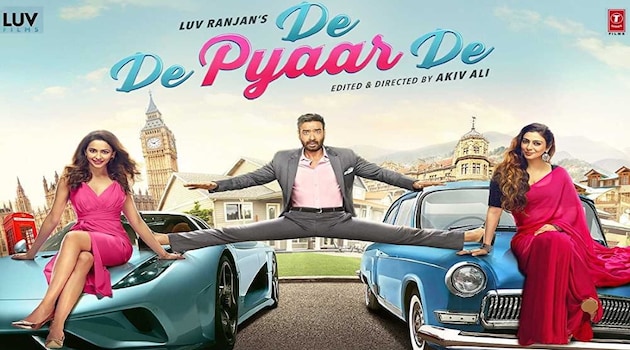 De De Pyar De is a movie which is surely here to make us understand, that age is just a number be it love or passion. De De Pyar De is directed by Akiv Ali and co-produced by Luv Ranjan who gave us hilarious ride with Pyaar Ka Punchnaama series and Sonu Ke Titu Ki Sweety. Ajay Devgn plays as Ashish who is an investment banker who is fifty is constantly termed as Buddha all the times. He happens to meet Rakul Preet Singh as Ayesha during his friend's wedding and sparks the fire. Tabu as Manju is his ex-wife who has separated from him from 18years. Post-intermission you can actually watch the women catfight when both the ladies leave no stone unturned to taunt each other. There are tonns of sequences where Tabu nails it completely. Ajay Devgn plays a decent part and can be seen in a good form. Rakul is giving it her best doing all the justice.

De De Pyaar De is entirely Tabu's show and certainly, none of the leads is able to steal it from her, while on the other hands, supportive cast like Jimmy gets an unwritten role and Alok Nath fairly does his part. Those who feel that love can happen at age or time, this movie shall give them an entertaining ride to this thought. With the idea of watching De De Pyar De, get ready to spend worthy 2 odd hours of sheer entertainment with this unconventional love story.

De De Pyar De Trailer has released on 1st April 2019. This is a teaser to the rom-com flick that stars Ajay Devgn, Tabu and Rakul Preet Singh in the lead. Watch the trailer and mark your calendars to watch it on 17th May 2019 in your nearest cinema halls.