Gunjan Saxena is 2020 a new Bollywood movie which is based on the life of first Indian Air Force women officer who went to war. This made Gunjan Saxena to be remembered as "The Kargil Girl". The Gunjan Saxena movie cast involves Janhvi Kapoor, Pankaj Tripathi, Neena Gupta and Angad Bedi in the pivotal roles. The movie is helmed by Sharan Sharma and the production banners are Dharma Productions and Zee Studios. The Gunjan Saxena: The Kargil Girl has released on 12th August 2020 on Netflix.

In the below story, find more details about the movie like Gunjan Saxena: The Kargil Girl trailer, songs, review and more. 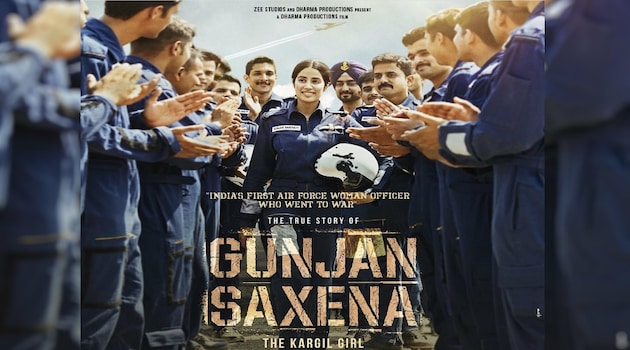 Gunjan Saxena: The Kargil Girl is the story of Gunjan Saxena (Janhvi Kapoor) who is a fearless young Indian Female Air Force Officer. She makes history by becoming the first Indian Female Air Force Officer who flew in a combat zone during the Kargil War, 1999.
Gunjan’s dream, since her childhood, was to become a pilot and she decides to quit her education after 10th to begin training of becoming a pilot. But when she finally manages to fill the form, after her graduation, she has to back out due to the huge training fees. Later, she bags an opportunity to get trained as a female Air Force Officer after which she heads for further training at the Air Force camp where the senior male officers humiliate her for being the only female in the camp. The story of Gunjan Saxena: The Kargil Girl is an inspiring story with some amazing actors justifying the characters they play in the movie. The movie also shows the relationship between Gunjan and her father (Pankaj Tripathi) who also supports her in her dreams.

This movie is a must-watch if you are looking for a movie that shows a father-daughter relationship and some recreations of the Kargil War, 1999.

Based on the life of Gunjan Saxena, this movie is a must-watch. This movie is available to watch online on Netlix. So wait no more to watch uninterrupted movie online.

Watch the official trailer of Gunjan Saxena: The Kargil Girl to see the journey of dreams turn into reality.