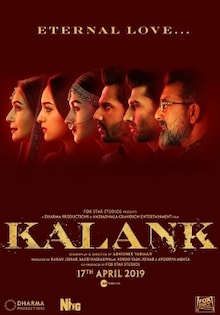 Kalank is the fourth movie of Varun and Alia Bhatt together as they were previously seen in: "Student of the Year", "Humpty Sharma Ki Dulhaniya" and "Badrinath Ki Dulhaniya". Kalank is one of the much-awaited Hindi movies which most of us are looking forward to. Kalank is a Bollywood 2019 period drama film that stars Madhuri Dixit, Sonakshi Sinha, Alia Bhatt, Varun Dhawan, Aditya Roy Kapur and Sanjay Dutt in the lead roles. Actors Kunal Khemu and Hiten Tejwani will also be seen in the supporting roles. Gorgeous ladies, Kiara and Kriti will be seen in special appearance songs which you can watch without any delay.

This historical romantic drama flick is set in the 1940s during the partition of India. The movie is helmed by Abhishek Varman and produced by Karan Johar, Sajid Nadiadwala and Fox Star Studios. Karan Johar revealed that Kalank was his father's (Yash Johar) dream project which was conceptualised 15 years ago and which is why Karan has an emotional connection with the movie. In Kalank you will watch, Sanjay Dutt as Balraj Chaudhry, Aditya Roy Kapur as Dev, Varun Dhawan as Zafar, Alia Bhatt as Roop, Sonakshi Sinha as Satya and Madhuri Dixit-Nene as Bahaar Begum. For the movie, Madhuri and Sanjay Dutt were finalized as the leads 14 years ago to which now Alia as Roop and Varun as Zafar is now playing the leads. Well, Alia Bhatt has been not in the news for just Kalank, her upcoming movies like "Brahmastra" with beau Ranbir Kapoor and "Inshallah" with Salman Khan have been into the news for quite a few time. While at the same time Varun Dhawan is busy with Street Dancer 3D schedules. Below, take a look at the other details related to the movie like Kalank trailer, cast, songs, release date and much more. 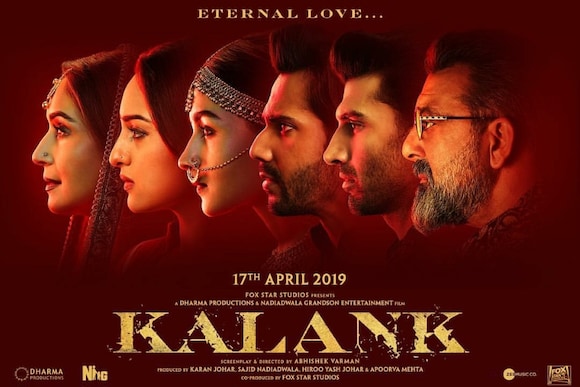 Kalank is one of the most visually appealing movies of 2019 as it packs the multi-stars in this period drama which comprises splendid sets, visual luxury and intense emotions that are all packed together to make it an apt Bollywood drama but it ain't enough. This movie definitely gives you new wardrobe goals but with the luxurious wardrobe, it makes it difficult to that poor is actually poor, as you can't differentiate between the poor and rich. Bahar Begam kothas reminds you of those from the Devdas movie. How Roop is dragged into the marriage reminds of Nandani from Hum Dil Chuke Saman and the collection of shawls Sanjay Dutt has reminds you that of Kabhi Khushi Kabhi Gham. No one watches a movie to get wardrobe inspirations but to get content that is worth their money and full of entertainment. The overly stretched sequences often bore you to the core. The characters lack connecting with the audiences and just fails to do justice to the story. It's difficult o match up to the excellence of the Madhuri Dixit Nene, but Alia, on the other hand, have worked hard and it shows. You get to see the maximum Varun and the lesser of Sonakshi who tries to do justice in the screentime that has fallen on her lap. Kunal drops a noticeable performance and makes it clear that he deserves more than what he'd got in Bollywood. The songs that feature Kiara and Kriti seems disconnected and makes it difficult for us to believe - "Kya 1940's mein aisa hota tha?". Watch Kalank movie only if you want to delight your soul with the lavish sets and costumes and the story hardly matters to you.

Kalank was one of the much-waited movies for all the Alia Bhatt and Varun Dhawan fans. Kalank is now available online, which now you sit on your couch with a bowl of popcorn and watch the entire movie with utmost comfort. Wait no more to watch Kalank full movie online in HD and enjoy the lavish set and exotic costumes for some personal inspiration.

Kalank teaser was intense! Alia, Varun, Sonakshi, Aditya, Madhuri and Sanjay looked mesmerising in the teaser of Kalank. Now that the Kalank official trailer has released on 3rd April 2019, we just can stay calm until the movie releases.

After "Ghar More Pardesiya" and "First Class" and "Kalank Title" now its time of unveiling the mesmerising track starring Madhuri Dixit in "Tabaah Ho Gaye". The music of this movie is composed by Pritam. Those who will be giving their voices to the songs are Arijit Singh, Darshan Raval, Hriday Gattani, Harshdeep Kaur and Mohit Chauhan.Songs like "Ghar More Pardesiya", "First Class", "Kalank Title track", "Tabaah Ho Gaye" and "Aire Gaira" have tempted us to watch Kalank as soon as it releases.