Kesari is a 2019 Bollywood period war drama film which is directed by Anurag Singh. The movie stars Akshay Kumar and Parineeti Chopra in the lead roles. Also, you can see with Mir Sarwar, Vansh Bhardwaj, Vivek Saini Jaspreet Singh and Vikram Kochhar in the supporting roles. The first look was released by Akshay Kumar on his Twitter handles on 12th Sept 2018, which is also famous as Saragarhi Day and since then the audiences are waiting to watch this much-awaited Hindi movie. The movie depicts the story of Havildar Ishar Singh who participates in the Battle of Saragarhi (in which an army of 21 Sikhs fought against 10,000 Afghans in 1897) while yearning for the respect of his estranged daughter. The Battle of Saragarhi was fought on 12 September 1897 and so that day is remembered as Saragarhi Day. Akki seems really devoted towards this role and we're equally excited to watch him on 21st March 2019. Well, Mard Ko Dard Nahi Hota is also releasing on the same date, do check out this also. 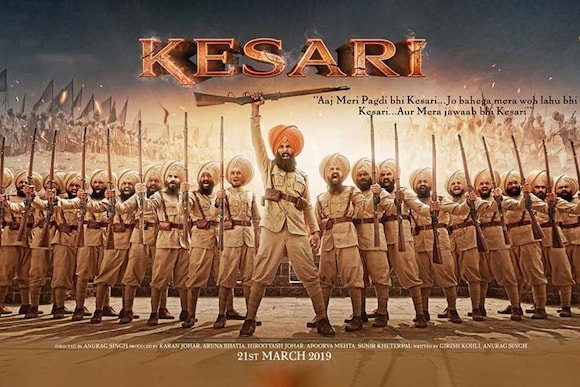 Kesari starer Akshay Kumar and Parineeti Chopra received an overwhelming response not only from the audinces or Bollywood peers and but also from the critics. The Anurag Singh directorial's storyline is based on the real-life events which have been also one of the bravest battle and popular as "Battle of Saragarhi". Kesari movie has its heart in the right place. The actions are well choreographed and shown in a way that if it wasn't true you wouldn't believe it. The main aim of the movie Kesari is to valorize the Sikh Regiment. Parineeti has an immense capacity and deserved a little more. The dialogues are powerful which will surely hit the patriotic chord of your heart and raise your courage. Events during the fight some sequence are worth glueing. The first half might seem quite boring and reveals only the intro of the characters. The battle starts in the second half.

But want to share the reviews of the famous Indian critic "Taran Adarsh" who gave Kesari "5 star" and came with the verdict in one word- "OUTSTANDING". He also praised the director of the movie "Anurag Singh" for showing his terrific direction skills while directing the movie. Go watch this Khiladi movie which is claimed by the best movie of Akshay Kumar's career. Wait no more to book your Kesari movie tickets online!

If you weren't lucky enough to watch Kesari in your nearest cinema halls. Worry not, as now you can watch Kesari movie online in HD without any hassle. Gear up to watch the Battle of Saragarhi now in never before depiction in the form of the Kesari movie.

The music of the Kesari is composed by Tanishk Bagchi, Chirantan Bhatt, Arko Pravo Mukherjee, Jasbir Jassi, Jasleen Royal and Gurmoh. The lyricist of the songs are penned by Kumaar, Kunwar Juneja, Manoj Muntashir and Tanishk Bagchi. The song "Teri Mitti" was released on The Kapil Sharma Show by Akshay Kumar as a tribute to the Indian Army Forces as it hits the patriotic chord of your heart.

Kesari Movie ticket booking offers are now live and Akshay Kumar is urging the youth of the nation to watch the movie as the movie is about courage and strength. Not only that, but he also urges parents to take their kids along to watch the movie and realize the strength of our history which we're barely aware of. In our below story, find the popular Kesari ticket booking offers that comprises of alluring Kesari movie coupon using which you can easily book movie tickets online at pretty good prices. Find Kesari movie coupon from BookMyShow, Paytm and more to book your ticket to entertainment. Gone are days, when tiring queues used to ruin the excitement of watching the movie. Take a look at the  Kesari ticket online booking offers to book movie tickets to PVR, INOX, Cinepolis and IMAX too.