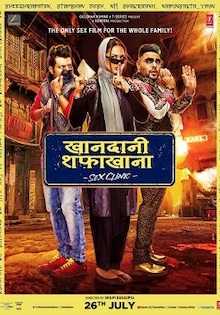 Khandaani Shafakhana is a new Hindi movie that stars Sonakshi Sinha, Varun Sharma, Badshah and Annu Kapoor in the lead roles. With this Bollywood 2019 comedy-drama flick, Badshah marks his acting debut in Bollywood. The movie is directed by Shilpi Dasgupta. The famous song "Sheher Ki Ladki" has been revised by Badshah and the appearance of Suneil Shetty and Raveena Tandon made us go nostalgic.

The film follows the story of a happy-go-lucky Punjabi girl, Babita "Baby" Bedi (played by Sonakshi Sinha), who can do anything for her family. Then her uncles ask this young girl to look after her uncle's sex clinic. She decided to that and that's when the entire fuss rises. Talking about sex in a village may not be a big issue but talking about male sex issues to a girl can be a tussle for many. She starts facing problems with the patients and then she meets Badshah, the rockstar, and requests him to make a song that could help people share their sex-related problems.
The trailer seems interesting but we don't want to predict and ruin the fun of the plot. One thing can't be denied that Khandaani Shafakhana is giving us major Vicky Donor vibes. In the below story, find Khandaani Shafakhana release date, songs, trailer, review and more. Not only this, but also find Khandaani Shafakhana movie ticket offers and prices so that you can book movie ticket online without any hassle. 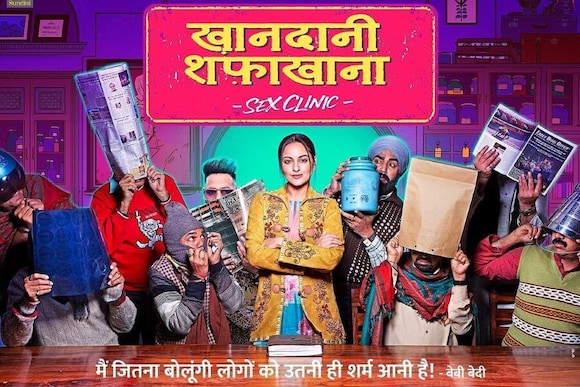 Khandaani Shafakhana is indeed a sparkling movie which revolved around a small-town girl of Hoshiarpur, Punjab who later inherits her uncle's sex clinic to support her family. Baby Bedi is a hard-working girl who is surrounded by a lazy brother and let down by relatives who stills struggles harder to support her family after her father's death. That's when her uncle handed over his sex clinic to her for 6 months and asks her to run if she needs to solve her monetary issues. Now, that's a tough one for a girl to handle a sex clinic that too in a city like Hoshiarpur where people barely say the word "sex". Watching her journey manage herself to work the clinic and turn people come at it would be interesting, isn't it? The film has an authentic ambience where you can see those surroundings which makes you feel as if you're right there. You can see Sonakshi in almost every frame of the movie, which means there is too much pressure on her to deliver the best to hold the attention of the audiences which gets flatten over time. Badshah's first Bollywood debut is an impressive and bold attempt where he plays the role of a rockstar who suffers from erectile dysfunction. Varun Sharma does what he does the best, that is a senseless comedy. The idea is great to attempt but what does not falls in place in the direction and the story. The writing goes weak at many times and the jokes seem underlined. Where the movie is here to deliver a strong message "the importance to be open about sex". However, the movie lies nowhere around Vicky Donor, so watch Khandaani Shafakhana to see the message and not the story.

The music of the film Khandaani Shafakhana is composed by Badshah, Tanishk Bagchi, Rochak Kohli, Payal Dev and Vipul Mehta The lyrics are penned by Badshah, Kumaar, Tanishk Bagchi and Mellow D. After the "Koka", "Sheher Ki Ladki" and "Dil Jaaniye" the new song "Saans To Le Le" is out. Watch the song below!