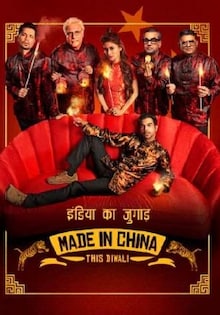 About Made in China Movie

Made in China is a Bollywood which stars Rajkummar Rao, Mouni Roy and Boman Irani in the lead roles. The film is directed by Mikhil Musale, who had also directed the National Award-winning Gujarati film "Wrong Side Raju". Made in China released on 25th October 2019, on the eve of Diwali 2019.

In the movie, Rajkummar Rao can be seen the role of a Gujarati entrepreneur, Raghuvir who goes to China and returns with a soup made from tiger parts that supposedly improve sex life and cures all sex-related problems. Raghuvir then becomes rich, but the rest is yet to be revealed. In the movie, Mouni Roy plays the role of Raghuvir’s wife. In the below story, find Made in China trailer, songs, release date and more. Also, you can also find alluring movie ticket offers so that you can book tickets on BookMyShow, Paytm and more. On the eve of Diwali, Made In China shares its release date with other two Bollywood movies Housefull 4 and Saand Ki Aankh. 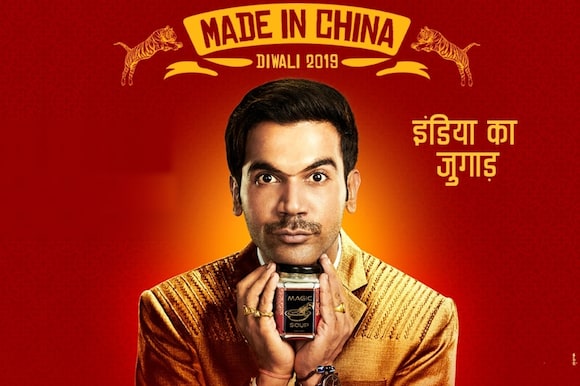 Made in China Movie Review

Set in the native of Ahmedabad, Made in China is not only about the spirit of entrepreneurship but it also conveys a message about the need to talk about sexual problems more openly.

Made in India is about Raghuvir Mehta (Rajkummar Rao) who is struggling to attain success in business, basically, any type of business from selling emu eggs, to roti makers, square-shaped watermelons and Nepali carpets but none of them takes off. He then accompanies his cousin (Sumeet Vyas) to China where he meets a Gujarati businessman (Paresh Rawal) who gives him a perspective on marketing and a meeting with a Chinese stimulant manufacturer convinces him that he has found what he needs to run his business about. Inspired by a well – known sexologist Dr. Watsa, Raghuvir manages to convince Dr. Vardhi (Boman Irani) and offers him to help spread awareness about overcoming sexual problems in exchange for prescribing his stimulant, Magic Soup, to the men who suffer from performance issues. The romantic moments between Raghuvir and his wife Rukmini (Mouni Roy) and how she becomes his pillar through his entrepreneurial journey is a refreshing story to watch.

If you are looking for a light-hearted comedy with an amazing script, Mikhil Musale directorial Made in China is the kind of movie you should opt for.

Watch Made In China Full Movie Online in HD

Watch this comedy flick that showcases the story of a failed businessman that later on changes his life forever. Gather all your movie essentials like snacks and comforter and create an ambience to watch Made In China full movie online in HD sitting comfortably on your recliner.

Made in China Movie Trailer

Made in China Movie Songs

Take a look at the Made In China songs below and get ready to see how Mouni and Rajkummar bond in love and romance with each other.

Pagglait
Fear of Missing Out Best Deals?
Subscribe to our newsletter. Now!