Panipat is a new 2019 Bollywood movie that features Kriti Sanon, Arjun Kapoor, Sanjay Dutt, Padmini Kolhapure and Mohnish Bahl in the lead roles. Ajay-Atul are composing the music for this historical period drama film. The songs of the movie will be written by Javed Akhtar. The movie will be directed by Ashutosh Gowarikar. The Panipat release date 6th December 2019. In the below story, find everything about Panipat trailer, songs, cast and more. Take a look at the Salman Khan starrer movie Dabangg 3. 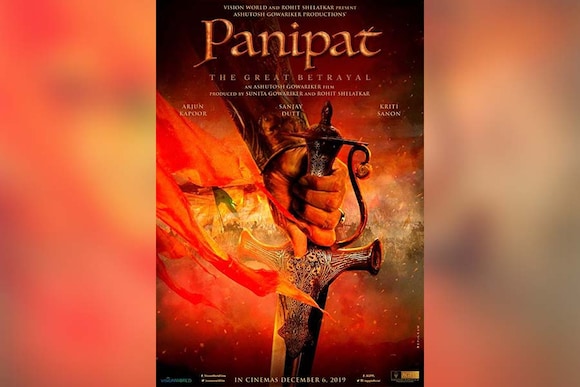 Ashutosh Gowariker is back with yet another historical drama, Panipat, narrating the story of the third battle of Panipat of 1761 which took place between the Marathas and Afghanis.

Panipat is the story of Sadashiv Rao Bhau (Arjun Kapoor) who is a commander in Nanasaheb Peshwa’s (Mohnish Bahl) army but later he is made to lead the army to Delhi by the Maratha Peshwa, after the battle against Nizam of Udgir. Then there is Ahmad Shah Abdali (Sanjay Dutt) who has formed an alliance with Najib-Ud-Daula (Mantra) with the intention to defeat the Marathas and expand their control over India. Parvati Bai (Kriti Sanon), Sadashiv’s wife also joins the troop of the army from Pune to Delhi along with Sadashiv’s nephew and Peshwa’s heir Vishwas Rao (Abhishek Nigam), his cousin Shamsher Bahadur (Sahil Salathia) and his advisor Ibrahim Khan Gardi (Nawab Khan). You will also get to catch a glimpse of the romance between Sadashiv and Parvati. The war sequences shown in Panipat are so brilliant that it will give you goosebumps. The added bonuses to the film are the characters of Mohnish Bahl, Padmini Kolhapure and a special appearance of Zeenat Aman.

If you are a fan of history and war drama, Panipat is the movie that you should definitely watch, without thinking twice about it.

Panipat trailer is one of the most awaited trailer. Take a look at the Panipat official trailer now.

The songs from the movie Panipat are finally out. After raring songs like "Mard Maratha" and "Mann Mein Shiva", the new song "Sapna Hai Sach Hai" from the Panipat movie is OUT. Take a look below.