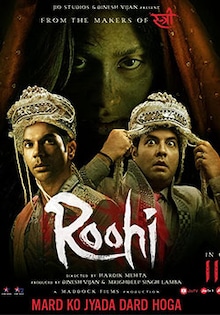 Here comes the horror-comedy flick of 2021 named Roohi that has an impeccable cast is all set to hit the cinema halls. Roohi is a horror Hindi movie that has Janhvi Kapoor, Rajkummar Rao and Varun Sharma in the lead roles. There are speculations that Shraddha Kapoor will be seen in a special appearance. The film tells the story of a ghost who takes away illegally or kidnaps away brides on their honeymoons. Earlier the name of the movie was Roohi Afza which has been changed to Roohi Afzana and then to Roohi, finally.

Roohi has already hit the cinema halls on 11th March 2021. The movie is helmed by Hardik Mehta under Maddock Films banner. After the massive success of Stree (2018) and Dhadak (2018), both the leads Rajkummar Rao and Janhvi Kapoor of the respective movies collaborate together in Roohi, making it the third movie of Janhvi Kapoor. The movie marks the second collaboration of Rajkummar and Varun Sharma after Dolly Ki Doli (2015). Roohi is the first Bollywood release to hit the theatre's post-lockdown after the ministry of information and broadcasting permitted cinema halls nationwide to operate at full capacity from 1st February 2021 provide all Covid-19 safety protocols are taken care of. The movie is now available to watch online on Jio Cinemas.

We're wanting to see more of this duo which apparently makes it another new Hindi movie of 2021. So, wait no more and scroll down to watch the new song and Roohi trailer (if you haven't watched it yet) right away. Find the Roohi movie ticket booking offers so that you can easily book Roohi movie ticket online at pocket-friendly prices on BookMyShow, Paytm and Amazon Pay.

Dinesh Vijan who is one of the producers of the movie has three movies lined up after the release of Roohi that are also horror-comedy flicks, Stree 2, Munjha and Bhediya. We're curious to watch the series of horror movies that are soon to hit the cinema halls in the coming years and months. Roohi is about two small-town boys Kattani (Varun Sharma) and Bhawra (Rajkummar Rao) who are known to kidnap brides for their grooms and forced into unwanted marriages, calling it "Pakdai Shadi". Their lives get complicated after kidnapping Janhvi Kapoor who is playing the role of both an ordinary girl, Roohi and Mudiya Pairi, Afza.

The roller coaster ride begins when and as the movie proceed you get to understand tasteless jokes wants you to laugh out loud and indeed Rajkummar and Varun are able to carry the movie on their shoulders. The first half of the film is filled with comedy punches but the second half falls flat. The comedy punches are really good but unfortunately even the “supposed horror scenes” also look like comedy scenes. The actors Rajkummar and Varun have done an amazing in pulling off their characters and Janhvi as both Afza and Roohi has also been great. Truly wondering why Roohi was made because even though it is of the horror-comedy genre, it only has comedy in the entire film. Another thing that is a major put-off in the film is playing safe by remaking the old songs instead of creating something new. Audiences would love it if there were efforts put into making new songs that would have definitely been icing on the cake.

All in all, Roohi is a kind of film that will lighten up the mood after soo long by watching the movie in your nearest theatres, but if you are looking for horror then you will be left disappointed.

The trailer of the movie hints you towards impeccable VFX, and spooky soundtrack along with subtle details and nuances, Roohi will make you want more. Janhvi looks promising with her prosthetics and the Roohi official trailer is also filled with witch cliches which will make you want the movie as soon as it hits cinema halls. Time to take a look at the Roohi official trailer below.

The music of the Roohi film was composed by SachinJigar and lyrics are penned by Amitabh Bhattacharya. Take a look at the new song "Nadiyo Paar" and see Janhvi ablaze the mood and make you groove to its beats.