Saina is a sports biopic that is based on the life of the Indian Badminton player Saina Nehwal. It stars Parineeti Chopra as Saina Nehwal alongside Meghna Malik as Usha Rani Nehwal, Subhrajyoti Barat as Harvir Singh Nehwal, Ankur Vikal as Jeewan Kumar and Manav Kaul as Coach Pullela Gopichand. The film has been directed by Amole Gupte and it is produced under the banners of Front Foot Pictures and T-Series. Saina has been distributed by AA Films has theatrically released on 26th March 2021. In the below story, you'll find more details like the Saina trailer, teaser, songs, and more.

It seems Parineeti is on a roller-coaster ride of movie releases as in the month of February Parineeti starer The Girl On The Train has premiered on Netflix and on 19th March  2021 Arjun and Parineeti starer movie Sandeep Aur Pinky Faraar has also hit the cinema halls. 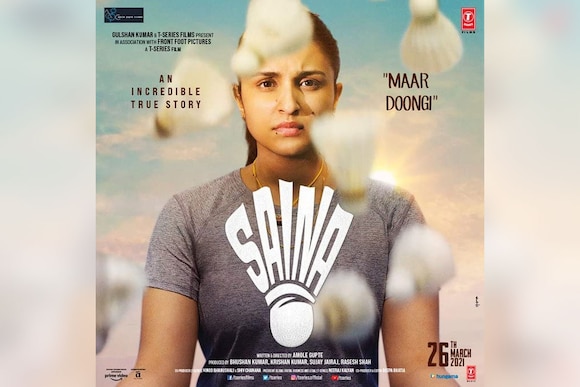 The story of Saina is inspired by the life of India’s ace Badminton Player Saina Nehwal. Born in Hyderabad to a Haryanvi couple Usha and Harvir Singh Nehwal, Saina becomes the first Indian women and 2nd Indian to achieve World No.1 rank in Badminton. The director of the film, Amole Gupte has kept the story simple and followed the common drill of a sports drama biopic- struggle, the road to success, loss of success and revival. The film is filled with patriotic moments that are not over the top and there is no unnecessary drama in the film. Young Saina, played by Mumbai’s talented 10-year-old Badminton player Naishaa Kaur Bhatoye, has done a phenomenal job. Parineeti Chopra, as adult Saina, has done a pretty decent job despite being from a sporting background but it could have been better.

Saina is definitely a film that will make you feel good but not the kind that will awaken the intense patriotic feeling in the hearts.

Find the Saina official trailer and teaser below.

Take a look at all the songs of the Saina movie below.