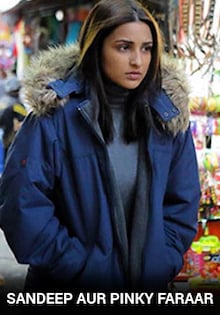 In the below story, take a look at the other details like Sandeep Aur Pinky Faraar movie trailer, songs, release date, review, cast and many more. Sandeep Aur Pinky Faraar is a dark comedy that is the story about a suspended Haryana Police officer Pinky and how he saves Sandeep Walia, a successful banker, from being killed by her own boss. The film does have sitting-on-the-edge moments in the story, especially in the first half but the second half gets very predictable. The writer-director of the film Sandeep Aur Pinky Faraar, Dibaker Banerjee, have also shown the massive bank scams that happen in India. Parineeti Chopra as Sandeep aka Sandy has played her character and did just to it remarkably but Arjun Kapoor as Pinky fails to impress with his performance. Actors like Neena Gupta and Raghubir Yadav as the couple who gets scammed and Jaideep Ahlawat as a cop have also played their characters effortlessly. The loud music given by Anu Malik is also the buzzkill of the film.

Sandeep Aur Pinky Faraar is the kind of film that will entertain you but the slow storyline and screenplay can also make you lose interest in the film.

All the fans of the duo, Arjun Kapoor and Parineeti Chopra can now watch Watch Sandeep Aur Pinky Faraar movie online at the comfort of your space on Amazon Prime. If you're already a Prime member then you can watch the movie online without any hassle but if you aren't then you have to go for Amazon Prime subscription to watch the movie in supremely high-definition quality.

Take a look at the Sandeep Aur Pinky Faraar movie songs below.