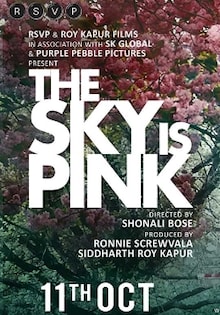 About The Sky Is Pink Movie 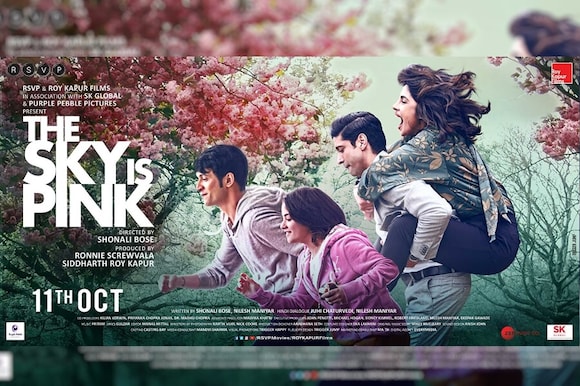 The Sky Is Pink Movie Review

The Sky is Pink is based on a real story of Aisha Choudhary, played by Zaira Wasim, who was a motivational speaker. She was diagnosed with a genetic disease called SCID (Severe Combined Immune Deficiency) right after her birth.

The story is narrated by Aisha, who is apparently dead and is narrating it through her grave. Aisha, a fun-loving girl, was the daughter of Aditi (Priyanka Chopra Jonas) and Niren (Farhan Akhtar) and younger sister of Ishaan (Rohit Saraf) who, when diagnosed SCID is taken to London for a bone marrow transplant and later they settle in the city. After she recovers from SCID, they move back to their hometown Delhi but later she gets diagnosed with lung damage called Pulmonary Fibrosis which is caused due to the chemotherapy that she had gone through after the bone marrow transplant and later dies due to this disease. One of the best things about this film is that it does not story does not get diverted from what is intended to be shown to the audience with the perfect balance of fun and emotion.

Watch the film to witness the heart-wrenching journey of Aisha Choudhary who not only becomes a motivational speaker but also turns into an author right before her death.

Watch The Sky Is Pink Full Movie Online in HD

If you have missed on to watch this movie which is based on a true story in which a teenager is succumbing to her terminal illness and she posthumously narrates her parents about the tenacious relationship as she turns into an author, then head on to click "Watch On Netflix".

The Sky Is Pink Movie Trailer

The Sky Is Pink Movie Songs

The songs of The Sky Is Pink movie is composed by Pritam and the lyrics are penned by Gulzar. After, the first song "Dil Hi Toh Hai" from the "Pink Gulaabhi Sky" song is now OUT. Watch the song below.

The Fakir of Venice