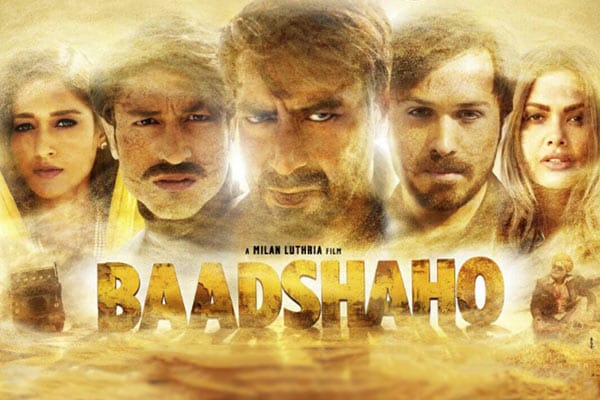 Baadshaho is the drama thriller Bollywood movie set in the background of the emergency time period back in 1975. Ajay Devgan and Ileana D`Cruz are playing the lead roles. It also stars Esha Gupta, Emraan Hashmi, Vidyut Jammwal and Sanjay Mishra. The movie was shot in Mumbai, Maharashtra and Jodhpur, Rajasthan. It is inspired on real – life events and takes you into the emergency era of 1970s. The story revolves around stolen gold, a thief (Ajay Devgn), an undercover cop (Vidyut Jammwal), Maharani Gayatri Devi (Ileana D'Cruz) and an army official (Emraan Hashmi), who is given the responsibility to protect the country's treasure.

The team of writer Rajat Aroraa and director Milan Luthria – who partnered on The Dirty Picture and Once Upon A Time in Mumbai comes up with another venture. Baadshaho is set in the backdrop of emergency. It was creating a lot of buzz since the release of its trailer but it does not live up to the expectation of the viewers.
“Woh army hai, aur hum haraami (they're the army, and we're bastards),” drawls Bhawani played by Ajay Devgn who is all to set to steal Rajasthani princess's gold which is seized by the government. Gitanjali (Illeana D'cruz) is the princess and owner of gold . Bhawani was once bodyguard of Gitanjali and is in love with her. The story revolves around how Bhawani with the help of Dalia (Emraan Hashmi), Sanjana (Esha Gupta) and safe cracker Tikla (Sanjay Mishra) escape the gold from the truck.
With bad Rajasthani accents, a socialistic distribution of gold and an abrupt ending that leaves us with the promise of sequel, Baadshaho is a Bollywood masala film that is not that Masaledaar.  Movie has some strong headed characters and amazing one liners that will initially set your mood but everything goes in vain in the absence of a coherent screenplay. The movie seems direction less at times so watch at your own risk.