Best Animated Movies Of All Time

Fond of animated movies? Checkout this list of the best animated movies you can watch and let your kids also enjoy these best cartoon movies for kids. 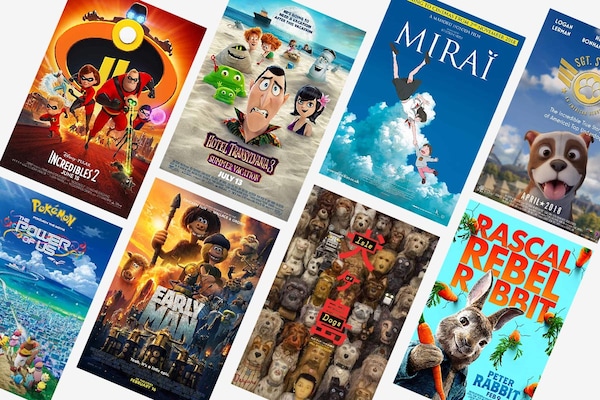 For the animated movie lovers we bring you the list of the best animated movies of all times that you must watch. Industry giants like Pixar, Disney and Sony Pictures Animation keep coming up with some great content, while some of them are sequels to successful blockbuster movies and some are new movies to watch. People from every age group enjoy watching animated movies be it adults or kids. These are the best Animated movies for your kids to watch.

Now a days, these animated cartoon movies play a vital role in educating kids with a variety of content. It can be entertaining but at the same time kids enjoy learning from things that appear comic, colorful and joyous to them. Previously only cartoons used to entertain kids, but in today's era, animated movies have grabbed the attention of many. Graphic designers do graphic designing that eventually results in these animated characters.

Best Animated Movies You Must Watch

We've listed some of the best animated movies you must watch, which shall leave you entertained and spell bound at the same time. Take a look at this list of best animation movies and begin your journey.

Set in the prehistoric era, Early Man is an animated comedy movie that tells the story of an early man, Dug and his partner Hognob and their struggle to unite their tribe against Lord Nooth to save their home. This kids movie is a must watch if you are looking to experience the lives of prehistoric men where prehistoric creatures like mammoth used to roam.

Peter Rabbit is a 3D live action and CGI animated movie, this cartoon movie is based on the characters and stories from the 1912 novel, Peter Rabbit written by Beatrix Potter. The plot revolves around a rabbit and a farmer, both competing to gain the affection of an animal lover girl who lives next door. The trailer got mixed reviews as some labeled the movie as too modern for the work of Beatrix Potter.

A one of its kind movie, the Isle of Dogs is a stop-motion animated movie that is set in the future Japan where dogs have been quarantined due to a canine flu. This adventurous animated movie tells the story of five dogs who are fed up with isolation until a human boy comes in their life in search of his lost dog.

Sgt. Stubby: An American Hero is an upcoming computer-animated biographical family adventure war drama film centered around Sergeant Stubby, a stray Boston Terrier who eventually becomes a hero during World War. It is starring Logan Lerman , Helena Bonham Carter and Gerard Depardieu. This action animated movie is going to be a dramatic one filled with war drama.

Probably the most popular animated movie franchise on the entire list, the Madagascar 1 hit the theatre with a bang in 2005. the movie was so well received that the DreamWorks Animation Studios decided to come up with more additions to the series and released Madagascar 2: Escape to Africa, Madagascar 3: Europe's Most Wanted and Penguins of Madagascar.

The Incredibles 2 is sequel to the 2005 blockbuster, ‘The Incredibles' which was a box office success. The movie changed the perception of traditional superhero movie with the addition of comedy, action, romance and some adult humor which made the movie enjoyable not just for children but for the adults as well.The fans were waiting for the sequel since the first movie and in 2014, finally the movie released in June 21, 2018.

The third installment to the Hotel Transylvania series and the sequel of the Hotel Transylvania 2, Hotel Transylvania 3 tells the story of a vampire, his daughter and grandson. The first two movies were a box office success and had got some great reviews and awards. The movie came as a surprise from Sony Pictures Animation. This latest animated movie is about a summer vacation on a cruise ship with hotel staff and the monsters on board.

Pokémon the Movie: Everyone's Story is a Japanese anime adventure film produced by OLM and Wit Studio. It is the 21st Pokémon movie released, and the second reboot film in the anime film series. It is a sequel to Pokémon the Movie: I Choose You! It is narrated by Unsho Ishizuka. It will surely be an entertaining animated movie to watch with your kids.

9. Mirai of the Future

‘Mirai of the Future' is an upcoming Japanese animated film directed by Mamoru Hosoda. Kun, a spoiled 4-year-old boy, comes across a magical garden where he meets his future sister Mirai who is now a young woman and has traveled back in time to see him. Their adventures together help Kun cope with learning how to live with a baby sibling. This animated movie is based on the concept of time travelling. This movie will entertain you to the fullest as its concept is unique.

‘Teen Titans Go! To the Movies' is an American animated superhero comedy film based on the television series Teen Titans Go! This Warner Animation Group production was written and directed by Aaron Horvath. The film features voices of Scott Menville, Greg Cipes, Khary Payton, Tara Strong and HyndenWalch, reprising their roles from the series, as well as Will Arnett, Kristen Bell, James Corden, Nicolas Cage, Halsey and LilYachty. This movie is in continuity of their crazy yet still active show, the Teen Titans.

Christopher Robin is an American fantasy comedy-drama film directed by Marc Forster, with a screenplay written by Tom McCarthy, Alex Ross Perry, and Allison Schroeder and from a story by Perry. The film will star Ewan McGregor as Christopher Robin, with Hayley Atwell, Bronte Carmichael, and Mark Gatiss in supporting roles, along with the voices of Jim Cummings, Chris O'Dowd, Brad Garrett, Toby Jones, Nick Mohammed, Peter Capaldi, and Sophie Okonedo. Christopher Robin, the little boy from Winnie-the-Pooh, is now all grown up, and has lost all sense of imagination. Pooh and his friends from the Hundred Acre Wood re-enter Christopher's life to help him find it again. It will be a movie based on friendship and how Robin's friends help him to get his senses of imagination back. It will be a cute and light hearted movie to watch.

Smallfoot is an upcoming American 3D computer-animated comedy film from Warner Animation Group. This film is written and directed by Karey Kirkpatrick and is based on a story by Sergio Pablos. The film stars the voices of Channing Tatum, James Corden, Zendaya, Common, LeBron James, Gina Rodriguez, Danny DeVito, Yara Shahidi, Ely Henry, and Jimmy Tatro. This movie revolves around Migo (Channing Tatum) who is a Yeti and is convinced that the elusive creatures known as "Smallfoots” (actually Humans) really do exist. It will be a comedy animated movie which will make you laugh your heart out.

‘Arctic Justice: Thunder Squad', is a British-Canadian computer-animated comedy-drama film co-written and directed by Aaron Woodley and co-directed by Dimos Vrysellas. The film stars voices of Jeremy Renner, James, Alec Baldwin, Heidi Klum, Anjelica Huston, Michael Madsen, John Cleese, Omar Sy, and Laurie Holden . Swifty, the Arctic fox works in a mail room of the Arctic Blast Delivery Service but dreams of becoming a Top Dog one day. To prove himself worthy of the Top Dog role, Swifty secretly commandeers one of the sleds and delivers a mysterious package to a mysterious location. He stumbles upon a secret fortress where he comes face to face with Doc Walrus, a blubbery evil genius who walks around on mechanical legs and commands a loyal army of oddly polite puffin henchmen. Swifty soon discovers Doc Walrus' plan to melt the polar ice caps and flood the world in order to reign as a supreme leader. Watch this action animated movie for a doze of adventure and fun.

‘The Grinch' is an American 3D computer-animated Christmas film produced by Illumination Entertainment. Based on the 1957 Dr. Seuss story ‘How the Grinch Stole Christmas!' is directed by Yarrow Cheney and Scott Mosier, written by Michael LeSieur and stars Benedict Cumberbatch. It will be an interesting movie to watch. Surely audience of every age group will thoroughly enjoy it. So guys do watch it, you all will find it an amazing film. If in any case u have missed the trailer watch it now.

‘Ralph Breaks the Internet: Wreck-It Ralph 2', is an American 3D computer-animated science-fiction adventure comedy film produced by Walt Disney Animation Studios. It is a sequel to the 2012 film Wreck-It Ralph. The story centers on Ralph's adventures in the Internet data space when a Wi-Fi router gets plugged into the arcade by Mr. Litwak as he must find a replacement part to fix Sugar Rush. Along the way, Ralph and his best friend Vanellope von Schweetz encounter new customs, worlds, and characters, such as trendy algorithms and the Disney Princess lineup. It's an adventurous movie that will keep you glued to it.

16. Spider-Man: Into the Spider-Verse

‘Spider-Man: Into the Spider-Verse' is an upcoming American computer-animated superhero film based on the Marvel Comics character Miles Morales/Spider-Man, produced by Columbia Pictures and Sony Pictures Animation. The film is directed by Bob Persichetti, Peter Ramsey, and Rodney Rothman, from a screenplay by Phil Lord. Shameik Moore voices Morales, starring alongside Liev Schreiber, Mahershala Ali, and Brian Tyree Henry. In this film, Miles Morales juggles his high school life with his status as a superhero. It is a thrilling animated movie to watch.