Month of October was full of action, drama, comedy, and romance with movies like - Secret Superstar, Golmaal Again and Chef released. We have your list of Bollywood Movies releases in October with their star cast and details.
Updated: Dec 01, 2017 11:16 IST 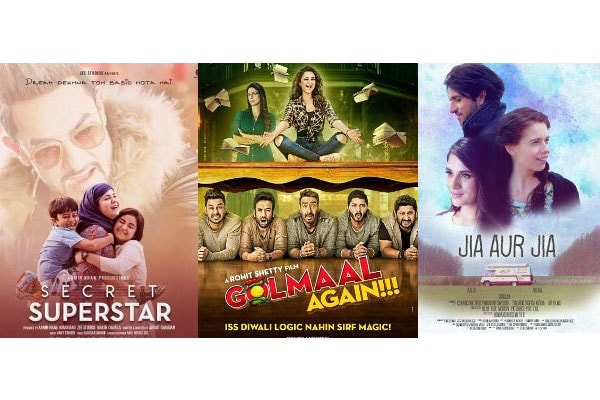 Upcoming Bollywood movies in October 2017, Gear Up To Book Movie Tickets
Some awesome Bollywood Movies released in October and these made sure they are all set to burst their entertainment crackers. The festive season saw Action, Drama, comedy, and romance. Popular Bollywood actors like Amir Khan, Ajay Devgan, Manoj Bajpai, Tabu, Parineeti Chopra, Arshad Warsi, Tusshar Kapoor and more are ready to celebrate the festive season with their upcoming Bollywood releases in the coming year while some were released in the Month of October 2017. Bollywood movies released in October 2017 were fully loaded with drama, comedy and entertainment which just cannot be missed.

Let's see which Movie Releases did Bollywood see in October 2017

1. Chef, Release Date: 6th October 2017
Chef is about a top chef Roshan Kalra, played by Saif Ali Khan, who is quite passionate about his work that he forgets about his family. While chasing his dreams and ambitions, he misses hi family and realize how his is missing out the sweet little moments which he used to spend with his family.  It is the official Hindi remake of Jon Favreau's 2014 American movie of the same name, Chef. The Hollywood original being a much-appreciated movie has evidently rose the expectations of the viewers from this movie.
Chef box office collection - Rs. 6.37 crore

Ranchi dairies Diaries depicts the story of a girl and her friends who hail from a small town. Movie casts Himansh Kohli, Soundrya Sharma, Taaha Shah, Anupam Kher and Jimmy Shergill. This film hit the theaters on 13 October 2017.

Secret Superstar is an upcoming Indian musical drama film, Produced by Aamir Khan and Kiran Rao. This movie plots story of a Muslim girl who aspires to become a singer. Zaira Wasim, Meher Vij, and Aamir Khan can be seen in the lead roles. The story is written and Directed by Advait Chandan.
Secret Superstar box office collection - Rs. 61.04 crore

Jia Aur Jia is an upcoming Bollywood road film directed by Howard Rosemeyer.  Stars Richa Chaddha and Kalki Koechlin are in the lead roles. The story is about two starkly different women that share the same name "Jia". Together, they embark on a life-changing journey that heads towards the same fate. The film was released on 27 October 2017.  Distributed by Bluefox Motion Pictures.

Rukh is Indian drama film directed by debutant Atanu Mukherjee. The film stars Manoj Bajpayee, Smita Tambe, Kumud Mishra and Adarsh Gourav in the leads. Story plots on an 18-year-old boy who is ignorant about the ongoing crisis in his family. This film released on 27 October 2017.

We also have the list of Bollywood Release for November for you. With movies like Ittefaq, Tumhari Sullu, Ribbon this month is also set for good amount of Drama - Read here : Upcoming Bollywood Releases In November

Update your movie checklist right away to never miss any upcoming Bollywood movie. Enjoy these movies in October 2017 of your favorite stars in the cinemas.