Haven't watched Padmaavat yet? Don't worry, you can watch Padmaavat online on Amazon Prime Video! Watch the alluring performances of Deepika, Shahid and Ranveer which are certainly going to leave you spell-bound.
Updated: Apr 12, 2018 18:29 IST 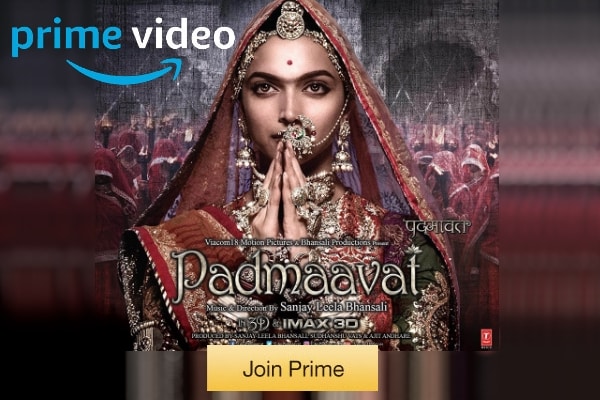 Watch Padmaavat Online On Amazon Prime!
Directed by Sanjay Leela Bhansali, the movie Padmavat has been the talk of the time for a long time, earlier was due to the Karni Sena protest and then the movie came to light for online leaks. However, struggling against all odds the movie proved to be a milestone in the start of the year 2018 for Bollywood movies. Also, Padmaavat is also the first Indian movie which is to be released in IMAX 3D format. The movie managed to pave its path to a blockbuster collection. People from round the world were searching for the online version of the movie, which has finally arrived. Amazon Prime has won the online streaming rights for Padmavat. Amazon Prime users can now watch Padmavat for free online on Amazon Prime Video. The launch of Padmaavat online would put a full stop to your search for online content of this historic drama and the viewers will be able to watch Padmavat online on Amazon Prime.
The movie Padmaavat is based on legend of Rani Padmini, a Hindu Rajput queen mentioned in Padmaavat, an Avadhi language epic poem written by Sufi poet Malik Muhammad Jayasi in 1540. The lead actors of the Padmaavat are Deepika Padukone, Shahid Kapoor and Ranveer Singh, while at Aditi Rao Hydari and Jim Sarbh are playing the supporting roles in the movie.
Wait no more to watch Padmaavat online on Amazon Prime.

Padmavat has beautiful songs and the song Ghoomar is already popular for Deepika's breathtaking performance. Take a look at other songs which shall keep you entertained throughout the movie.
Padmaavat already got lauded by the audience, so all Bollywood fans, wo hanv't watched Padmaavat due to some or the other reason take some time and watch Padmaavat online on Amazon Prime Video.

For the latest deals, offers and news, follow HotDeals360 on Facebook, Twitter, Instagram, Google News and subscribe to our YouTube channel.
The HotDeals360 team writes about stuff we think you'll like. HotDeals360 has affiliate partnerships, so we get a share of the revenue from your purchase.
Topic
Watch Padmaavat Online Watch Padmaavat Online On Amazon Prime Padmaavat Padmavat Padmaavati Padamavati
More From Movies
Advertisement
Fear of Missing Out Best Deals?
Subscribe to our newsletter. Now!
Trending
Latest
Quick Links