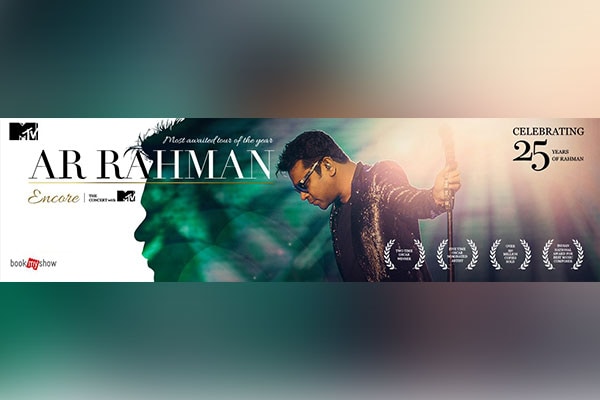 AR Rahman ENCORE Concert Tickets!
Who ain’t a fan of Oscar winning Music composer AR Rahman? I am sure, we all are. Ever thought of listening AR Rahman live at a AR Rahman Live Concert? If you’ve wished for same, then my dear friends here we bring some details to the latest AR Rahman Live Concert which is soon to be held across various cities in India between the months of November and December this year. Our much loved  music maestro AR Rahman have already embarked on a massive stadium for its much awaited musical tour A. R. Rahman ENCORE- The Concert, in association with MTV. This AR Rahman Live concert music tour is held to celebrate 25 years of Rahman. So, all the AR Rahman Live concert lovers, get ready to get enthralled by the musical journey.

For A. R. Rahman ENCORE- The Concert, musical king ‘Rahman’ is planning for an exclusive setlist that shall cover the entire spectrum of his best works starting from the ‘Roja’ to ‘Ok Jaanu’, which shall definitely beguile his Hindi music fans. The night shall become even more splendid when you’ll listen to AR Rahman playing some mystic pieces on to the piano.

Mark the dates on your calendar and book your tickets for the A R Rahaman 2017 Encore concert right away online on BookMyShow. Hurry up book your tickets for this AR Rahman Live Concert soon to get the best seats so as to witness this musical legend live in action.
For the latest deals, offers and news, follow HotDeals360 on Facebook, Twitter, Instagram, Google News and subscribe to our YouTube channel.
The HotDeals360 team writes about stuff we think you'll like. HotDeals360 has affiliate partnerships, so we get a share of the revenue from your purchase.
Topic
AR Rahman Encore Concert AR Rahman Concert tickets
More From Events
Advertisement
Fear of Missing Out Best Deals?
Subscribe to our newsletter. Now!
Trending
Latest
Quick Links
Trending
Latest