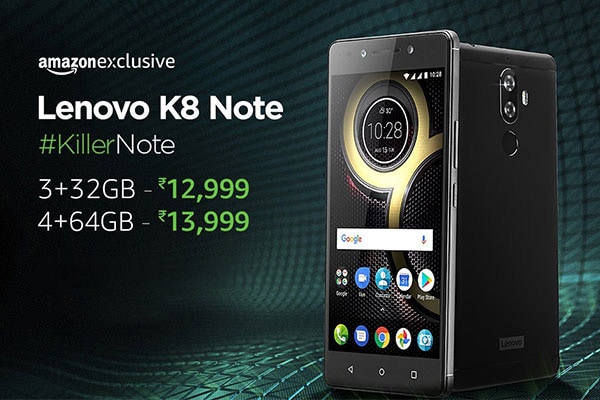 Lenovo K8 Note Sale Sharp at 12 Noon on Amazon.in
Lenovo after conquering the Indian market in the laptop sector has now started stretching its arms in the sector of smartphones. Lenovo K8 series is the descendant of its earlier launched series the K6 series, which was launched in December last year. The Lenovo K6 Note was available for Rs 13999 whereas the Lenovo K8 Note was expected to launch at a price of Rs 16990 until the exact price was unveiled.  With dual rear camera this is the first budget smartphone launched in India by Lenovo. The features and specifications of Lenovo K8 Note were divulged on Geekbench, the website known for benchmarking. The Lenovo K8 Note has secured 1659 points in single crore test and 4844 in multi-crore test. The Lenovo K8 note will be available in two colours that are Venom Black and Fine Gold. On the initiating day of sale additional offers will be available for early bookers. Lenovo would be offering Moto sports headphones which costs Rs 1,599 at just Rs 6,99. Other than that Idea cellular users would also be eligible to get 64GB 4G data and unlimited calling for 56 days at just Rs 343. Apart from that Lenovo is also planning to give up to 80% discount on Kindle e-books.

After a series of teasing by the company on its official social media pages, the company finally unveiled that it would be launching its new series K8 on August 9th in the Indian market. The launch date was unfolded on the official Twitter handle of the company.

Lenovo K8 Note has already launched in India on 9th August 2017 and is to go on exclusive sale on Amazon.in on August 18th at 12 Noon IST, which ranks among the top eCommerce websites.
India is the first country where Lenovo is introducing the K8 Note smartphone. The company has launched this phone in two variants. One is the 3GB 32 ROM and the other is 4GB 64GB ROM. Lenovo K8 Note sale on Amazon is to commence again on 1st September 2017 at 12 Noon. So, Geeks to gear up for the sale click on "Notify Me" to register for all the updates.

After OnePlus 5, Lenovo K8 Note has already taken over the curiosity of the smartphone lovers. So, you too gear up to grab the smartphone!

For the latest deals, offers and news, follow HotDeals360 on Facebook, Twitter, Instagram, Google News and subscribe to our YouTube channel.
The HotDeals360 team writes about stuff we think you'll like. HotDeals360 has affiliate partnerships, so we get a share of the revenue from your purchase.
Topic
Lenovo K8 Note Lenovo K8 Note Specifications shop Lenovo K8 Note on Amazon lenovo k8 note sale on amazon
More From Events
Advertisement
Follow Us
Fear of Missing Out Best Deals?
Subscribe to our newsletter. Now!
Trending
Latest
Quick Links
Trending
Latest