This pop icon Mika Singh needs no introduction. Don't we all love him? He has created a niche for himself a market which no one can invade. You have this chance to attend and feel his music Live at a concert. Yes, Book your tickets before they are sold out.
Updated: Nov 15, 2017 17:18 IST 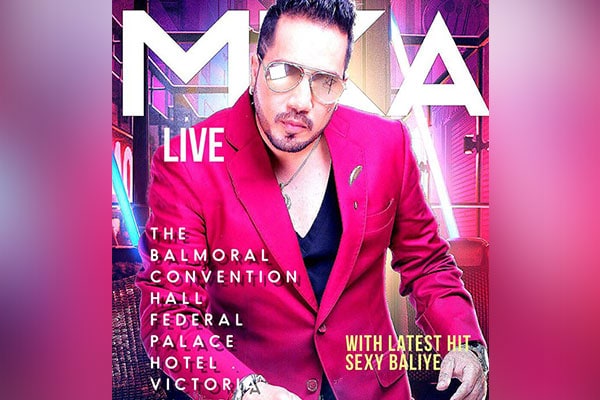 Mika Singh Live Concert
Be it a party, a wedding function or a get-together, everyone from a kid to grown-ups loves humming and dancing on his songs, after all, he is "The Powerhouse Entertainer". Yes, you got that right; we're talking about none other than Mika Singh who is one of the most popular singers of our country. His music has become the soundtrack of every single person's choice and no smartphone you'll find which does not any of Mika Singh's song in its playlist. Well, if you are a Papon & Fossils Fan we have his concert coming up on the 24th June in Delhi.

Mika Singh was born as Amrik Singh in Ajmer and is the youngest of the Mehndi brothers, eldest being Daler Mehndi who is already a well-known name in the town. He has risen from being a Kirtan Singer in his early days to a well-known pop and bhangra artist.

Mika Singh is not just a singer but he is also a fantastic composer, bang-on performer a great songwriter and a Music Director. This well-known pop and bhangra artist have reached unmatched popularity levels. Every song sung by him becomes a sensation among all age groups.Well, who's there, who haven't shaken their booties on his songs yet? M sure, the count is probably going to be the least. All after, who could resist being away from dance floors when his tracks are played.
If you've born in the 90's era, then you must have enjoyed songs like Sawan Mein Lag Gayi Aag, Gabru, Dunalli and Something Something, that managed to shake the music lovers across the globe. One of Mika's hit numbers emerged from the movie Housefull , Aapka Kya Hoga (Dhanno), which was a remake of the popular song from the movie Lawaaris of 1981. Today there is a huge number of smash hits chartbusters songs say it solo or Bollywood soundtracks that have grooved many of us on the dance floor.

The prominent ones that are even sung on the live events are like Sawan Mein Lag Gayi Aag (Album), Something Something (Album), Gabru (Album), Subha Hone Na De (Desi Boys), Gandibaat (R Rajkumar), Dhinka Chika (Ready), Pungi(Agent Vinod), Desi Beat (Body Guard) and 440 Volt (Sultan). All these songs turn the crowd crazy and make them dance to the fullest. Ain't that great!
For the latest deals, offers and news, follow HotDeals360 on Facebook, Twitter, Instagram, Google News and subscribe to our YouTube channel.
The HotDeals360 team writes about stuff we think you'll like. HotDeals360 has affiliate partnerships, so we get a share of the revenue from your purchase.
Topic
live concert mika singh mika live concert mika singh music mika singh concert in delhi concerts in delhi live music concert in delhi
More From Events
Advertisement
Follow Us
Fear of Missing Out Best Deals?
Subscribe to our newsletter. Now!
Trending
Latest
Quick Links
Trending
Latest