Our PM Narendra Modi birthday is to be celebrated on 17th September 2017. In the below story we've discussed his dressing style and what can be expected on Narendra Modi 67th birthday.
Updated: Sep 12, 2017 17:10 IST 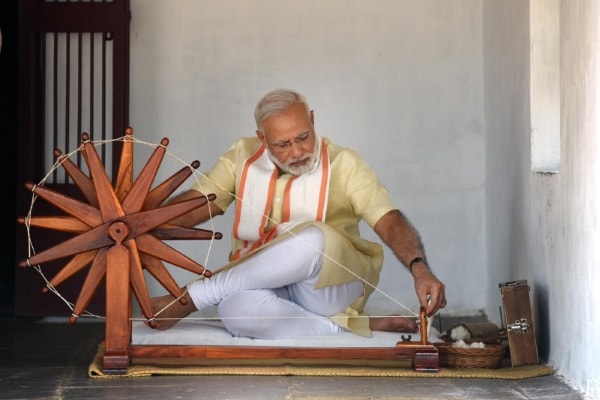 Narendra Modi celebrated his 66th birthday in a very special way. He began his birthday as he does every year with a visit to his mother Heeraben Modi in Gandhinagar to seek her blessings. After spending half an hour with his mother PM headed towards visited the Raj Bhawan or Governor's Palace. afterwards the celebrations was organised by the Gujarat government. They distributed 17,000 kits among 11,223 differently-abled people. The organizers aim to break a world record for maximum number of people in wheelchairs who form an image or a logo.

Narendra Modi has always amazed us with his iconic sense of style. Apart from being a good leader, Modi with his stunning styling sense has shown that with big powers do come big responsibilities, even with respect to style. Our PM has become a trend -settler  for the Kurtas. He generally wear short sleeved kurta with chudidar pajamas. Cut sleeves Bandi completes his look. On special occasion he prefers to wear Safari Suits. He keeps the color sober and sophisticated. So that the style statement of our PM, simple yet trendy. Here are some of the best looks of Mr Narendra Modi that he has carried around the world:

Mr Modi’s birthday cake was in a lot of buzz last year as it had broken the Guinness World Record for the tallest pyramid cake ever made. The cake was prepared by a Surat based bakery called Atul Bakery. The bakery collaborated with an NGO called Shakti Foundation for this feat. The cake for Prime Minister Modi's birthday honours PM's efforts for women empowerment with campaigns like 'Beti Bachao, Beti Padhao'. It was cut in the presence of 5000 girls and women. The colourful pyramid cake appeared tempting and yummy.

What all can be expected for Narendra Modi Birthday Cake 2017?

Just like previous year, this year also we are expecting something unique for Narendra Modi 67th birthday. You never known there could be another Narendra Modi birthday cake record set by their admirers. Well, the party president, Amit Shah has advised major party heads and leaders to celebrate PM Modi's birthday as "Sewa Divas".

Well, its our favorite PM's birthday on 17th September 2017 and if we could take up any of his initiatives as our resolution, no birthday wishes can make up to this because like PM Modi, we too wish to see developed and secure India so why not begin with contributions?
For the latest deals, offers and news, follow HotDeals360 on Facebook, Twitter, Instagram, Google News and subscribe to our YouTube channel.
The HotDeals360 team writes about stuff we think you'll like. HotDeals360 has affiliate partnerships, so we get a share of the revenue from your purchase.
Topic
Narendra Modi Birthday 2017 PM Modi Birthday PM modi birthday celebrations Narendra Modi dressing style
More From Events
Advertisement
Follow Us
Fear of Missing Out Best Deals?
Subscribe to our newsletter. Now!
Trending
Latest
Quick Links
Trending
Latest