After the huge success of the Realme 1 the sub brand from Oppo is again up with their latest phone the Realme 2. The Realme 2 is all set for its exclusive sale on Flipkart today. Get set for the sale! 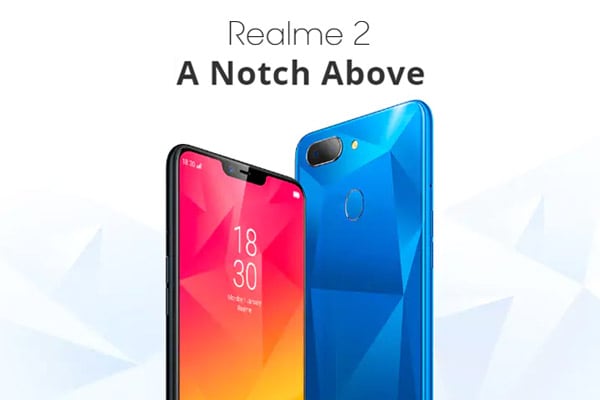 After several teasers being launched and media invites being sent, the Realme 2 from Oppo's sub brand Realme  was finally  launched in India on 28th August 2018. Flipkart is now all set for the Realme 2 sale scheduled for today. It is believed that the Realme 2 might be the first phone to come with a notch display in the budget range. After the huge success of the Oppo phones its sub brand the Realme too is doing wonders. The Realme poses strong threat to the other manufacturers of smartphone in the mid budget range. The Realme 2 is loaded with loads of interesting features. The Realme 2 features a 6.2 inch display, along with a dual camera setup, notch display and much more. The phone is powered by a 4230mAh massive battery to keep it going for atleast a day and a half. Get to know all about the launch date, sale date, specifications and offers of the Realme 2.

The Realme has launched it's all new Realme 2 in two variants, and both these notch phones come under the budget range. The first variant with 3GB RAM and 32GB internal storage is priced at Rs. 8,990. Whereas, the one with the higher RAM of 4GB and 64GB internal storage will now cost the buyers just Rs 9,499 bucks.This price drop is a great chance for the Realme lovers to get this phone.

The Realme 2, which is the successor to the Realme 1 was launched on 28th August 2018. As per the media invites sent by the company the launch took place at an event in New Delhi. The phone will now be available for sale today exclusively on Flipkart.

After the successful launch of the Realme 2, there is yet another good news for the Realme fans, the all new Realme 2 will now available for sale today exclusively on Flipkart.

Flipkart has joined hands with Realme 2 for its exclusive sale and is now up with some exciting offers for the buyers.

So get set to experience the notch at the best price ever. The Realme 2 is here to make your dream of owning a notch display phone come true.

Realme 2 Specifications and Price in India

For the latest deals, offers and news, follow HotDeals360 on Facebook, Twitter, Instagram, Google News and subscribe to our YouTube channel.
The HotDeals360 team writes about stuff we think you'll like. HotDeals360 has affiliate partnerships, so we get a share of the revenue from your purchase.
Topic
Realme 2 specifications Realme 2 India Launch Realme 2 Launch Realme 2 Price in India Realme 2 sale
More From Events
Advertisement
Fear of Missing Out Best Deals?
Subscribe to our newsletter. Now!
Trending
Latest
Quick Links
Trending
Latest