With Airtel Now Rollover Your Remaining Data To Next Bill Cycle

Airtel launched their next move, Data Rollover. Now you could carry forward your month's data if it stays unused.
Updated: Sep 15, 2017 16:40 IST 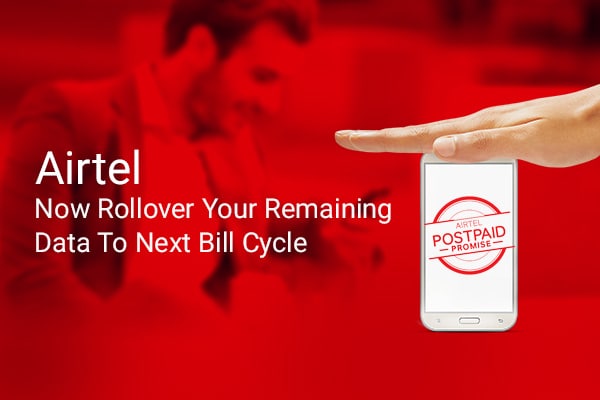 Airtel Data Rollover Plan Details
In order to combat Reliance Jio's major upgradation in its plan, Bharti Airtel has come up with yet another very exciting plan for its prepaid users. Generally the company has been focusing on releasing plans and offers for its pre paid customers but this time its bonanza for the postpaid users.With effect from August 1, 2017 the postpaid customers of Bharti Airtel would be able to rollover their remaining data balance to the next bill.This plan has been launched as part its new digital initiative program, “Project Next”. The company expects a huge investment of Rs 2000 crore in this plan over a period of time.
The telco said that, “the step will ensure zero data wastage for customers and brings unmatched value to the Airtel Postpaid proposition. Airtel talked to thousands of customers in its innovation lab and identified that unused data that expires at the end of the month is seen as a painful waste.”The company has launched it as a part of Postpaid Promise initiative, which involves the Data Rollover Promise, the Family Promise and The Security Promise. The data roll over plan and the family promise plan is new to the Indian telecom market whereas the security promise plan is not a new one.
“In simple words, Project Next focuses on making every touch point and every service of Airtel simple and practical”, said a source from Bharti Airtel.
The customer will fail to avail the benefit of the data roll over promise plan if they downgrade their existing plan. The Family promise plan gives you the luxury of customizing your own data plans as per the need of your family.
For the latest deals, offers and news, follow HotDeals360 on Facebook, Twitter, Instagram, Google News and subscribe to our YouTube channel.
The HotDeals360 team writes about stuff we think you'll like. HotDeals360 has affiliate partnerships, so we get a share of the revenue from your purchase.
Topic
airtel plans Airtel Data Packs airtel data rollover
More From Events
Advertisement
Follow Us
Fear of Missing Out Best Deals?
Subscribe to our newsletter. Now!
Trending
Latest
Quick Links
Trending
Latest