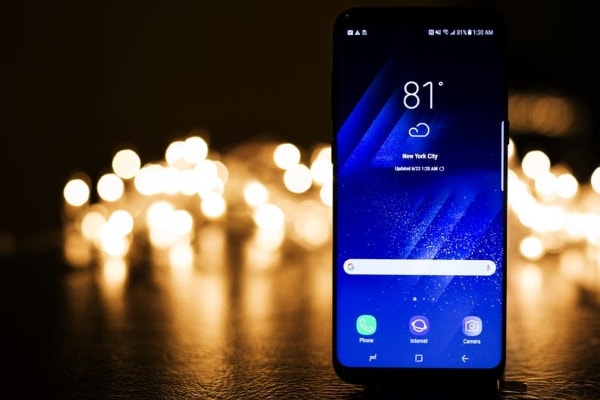 Starting from the least bezel less from the lot, the C9 Pro, when it came out it was the showstopper with its boastful specs and best in class side bezel less design. Although, not entirely bezel less, the phone was still the first of many Samsung phones which boasted their RAM was up to 6GB. It also has the best processors and that was out when it came out with the snapdragon 653 which to this date is one of the best processors. Other than that it has a full HD super AMOLED display with 16MP shooters on both sides. It has a massive battery size of 4000mAh which is more than enough for the phone to work for a longer time. Yes, not entirely a bezel less display but a power packed phone which will surely live up to the power it has and one of the best Samsung bezel less mobile phones.

A much budget friendly bezel less smartphone from Samsung is the Samsung Galaxy On6. The On6 is a phone which stands at the medium level mark with everything in its specs staying moderate other than its sleek design and the bezel less display. The phone has a 1.6 GHz octa core processor with 4GB of RAM and a super AMOLED display on just a 5.6 inch display. With a 13MP shooter on the back and a 8MP front camera the phone is just average but with the current price point that it has the phone is budget friendly and good for those who don't do any heavy tasking on the phone and want to make sure they look good with that phone because of the beautiful bezel less display, Somewhat decent it is still one of the best Samsung bezel less mobile phones out there.

J8 is like an upgrade of On6. With slight tune ups on the configurations and the processor the phone is suits its low priced bezel less display. Powered by a 1.8GHz octa core processor with snapdragon 450. The cameras were also upgraded to 16MP shooters on both sides with a 3500mAh battery which is just the right amount. The display gets a little stretch with a proper 6 inch AMOLED display the bezel less screen needs. The phone is an impressive one with great specs but not the best Samsung can do, overall a good phone to have that's why we included it in this list of best Samsung bezel less mobile phones.

4. SAMSUNG GALAXY A6 Plus

A great phone with great specs, the A6 plus is a tightly packed phone with a 6 inch super AMOLED bezel less display. It is somewhat similar to the J8 in regards to the specs which in terms doesn't justify the phone's high price, with just one difference holding up in its camera of 24MP on the front and dual rear facing shooters of 16MP and 5MP. Other than that the phones are quite similar. It has a 1.8GHz octa core processor and a snapdragon 450. The battery life is same and good at 3500mAh. An overall amazing phone but a little heavy on the wallet, but if you want some good photographs then this is the best Samsung bezel less mobile phone in this price range.

5. SAMSUNG GALAXY A8 Plus

You will not find a more sleeker looking phone than this. The A8 plus is an outstanding phone with great system configuration and looks. It gives us the best in class specs at the most reasonable amount. It is powered by a 2.2 GHz octa core processor with 6GB RAM. it captures stunning visuals with its dual front facing shooters of 16MP and 8MP with another 16MP on the back. The battery life is also good with a 3500mAh battery. It also has fast charging on a USB type-C chord and is also waterproof. Its stunning bezel less display is looped with full HD super AMOLED display in it 6 inches of stunning looks. The phone is a must buy for those who want to save a couple of bucks. Overall one of the best Samsung bezel less mobile phones out there and the most good looking.

This flagship from Samsung was done right. The phone was one of the best Samsung bezel less mobile phone of last year if not the best. It takes the term of bezel less and gives it a new meaning with S8's curved side edges, which makes the phone more stylish than anything else. The curved gorilla glass comes with a slightly smaller 5.8 inch display of ultra HD super AMOLED screen with curved sides. It has shallow 3000mAh battery but is accompanied with fast and wireless charging which evens it out. The 2.3GHz octa core processor and 4GB RAM gives the phone just the right strength it need for a 12MP back and a 8MP front shooter with a finger print sensor on its side. Not to mention also water proof. Overall the phone was a hit and is still a hit with its great specs and the best in class bezel less display.

This one is a lot bigger and a little better. The qualities S8 had, his big brother also comprises and more. S8 Plus has a bigger screen with a 6.2 inch ultra HD super AMOLED display. It has fast and wireless charging with a stunning 3500mAh battery, the phone is right for the taking. It has the same looks and class that S8 showcased with its bigger screen, it is like a cherry on the cake. The phone is powered by a 2.3GHz octa core processor with 4GB RAM, and the cameras also work equally well with a 12MP back and a 8MP front shooter for sharp visuals. The phone has 64GB of internal storage with a waterproof body and a very oddly placed finger print sensor on a very large phone. Other than that truly one of the greatest phones by the Korean tech giants. It is simply obvious for this phone to be added in this list of best Samsung bezel less mobile phones.

The latest flagship of the note series, the note 8 can easily be termed as the best smartphone in the market. It has a robust configuration and an outstanding design. By far it has the best screen compared to others. With a pixel density of 522ppi on a giant 6.3 inch super amoled display, you are assured that the visuals will be as clear as it gets. But with a giant phone comes giant specs. It is powered by a 2.3GHz octa core processor and 6GB of RAM, the highest RAM in any Samsung smartphone. It has dual sets of cameras on the rear at 12MP each and 8MP front shooter. Although, one might think that a giant phone will have giant battery life also. The phone has a decent battery of 3300mAh which is not expected at that price point but the fast and wireless charging evens the battery issue out. It has up to 256 GB of internal storage that is massive and also a waterproof and a dustproof built. Its curved edges and the bezel less display really makes the phone's design stand out from others and gives it the much required class it needs. Overall the phone might be considered by critiques as one the best smartphones out there, so we had to add the Note 8 to this list of the best Samsung bezel less mobile phones.

The latest flagship of the Samsung group, the S9 is one of the most loved by critiques of all time. It has won multiple awards for its outstanding designs and is considered among the top phones in the world today. The phone has some of the best specs you can possibly ask for. It has one of the best smartphone cameras in the world right now and its display is out of this world. It clocks in at 568ppi of pixel density (highest in Samsung) with a 5.8 inch super AMOLED HD gorilla glass display allowing the visuals to look more than just “visuals”. It is powered by a 2.7 GHz quad core + a 1.7 GHz quad core processor with 4GB of RAM making it one of the best processors in the world right now. It is the fastest Samsung phone today. And with just 12MP on the rear and a 8MP front shooter the phone camera has won multiple award for being one of the best in class camera smartphones. The battery lags behind with just 3000mAh battery making the life of the phone much less than it needs. It also has fast and wireless charging with also being a waterproof phone. This time the finger print sensor is on a much better place, on the back below the camera. It is a genuine flagship of Samsung with its curved edges and a much less bezel display making it the 2nd best Samsung bezel less mobile phone today.

Looking at the case with S8 and S8+, both the phones were quite similar in mostly every aspect. The S9+ is different. It is the same in design and basic structure but internally the S9+ is the best phone with strongest processors making it one of the fastest Samsung phones out there. Its powered by dual processors of 2.7 quad core and a 1.7 quad core which are then coupled with the highest RAM in Samsung with 6GB of RAM. The S9+ is a BEAST in specs and configurations. Consisting one of the best smartphone cameras ever with dual 12MP rear shooters and a 8MP front. It has that same basic design of the display and the screen with pixel display of 531ppi and a giant 6.2 inch gorilla glass super AMOLED HD display, one of the best in the world. S9+ also fixes the shallow battery problem with a bigger 3500mAh battery which is decent enough for the phone compared to it younger brother. Other than that more or less everything is the same as S9 with fast and wireless charging and being waterproof. The fingerprint sensor maybe placed in a pretty odd place for a big phone like the S9+ with the sensor being just below the camera on the back. Anyone with small hands will have a hard time operating the phone. Overall, S9+ is by far the best smartphone one can have and is listed as the best Samsung bezel less mobile phone till this date.