Toy guns are a favourite of many kids. Be it as a parent's gift to the child or a birthday present, these toy guns are fun to play with, and keep the child active and engaged. We bring you a list of best guns for kids that you can shop right away. 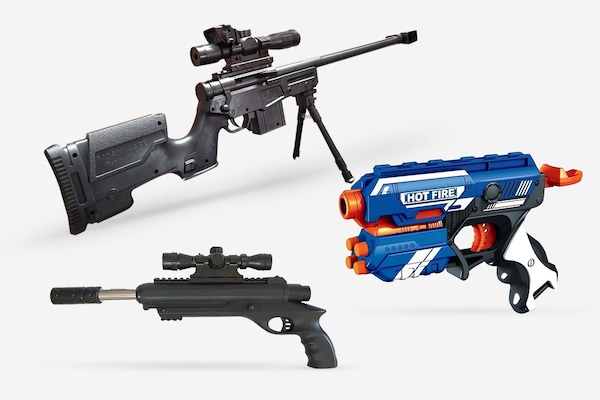 Many may not know, but toy guns can help build motor skills and develop better focus in children. Aiming at a target lets kids focus on a single point for long duration and thus build their body balance and stability, which is a huge benefit in the long run. These pretend battle games that kids play also help build their confidence and creative skills, while also helping them identify the good from bad, the antagonist from the protagonist. Let's take a look at the best gun toys out there.

This toy gun from Toyshine comes with 10 bullets and a safe long range. The foam bullets are safe to hit on anybody and do not cause any harm or damage. Let your kids have a great shooting dart game session with their friends or a pretend, playtime war game. If you have a kid who wants to pursue shooting, set targets for your kids and let them practise their game and aim better.

Shoots Four Bullets At Once

This great looking compact gun with 10 foam bullets is just apt for kids. Its high shooting range and great launch darts make play time fun and active for kids. This gun works on the pullback trigger function and can load five of the harmless bullets at once. This gun is easy to operate and is made from a superior quality plastic, which is strong and durable.

This sniper gun has an almost real looking and sturdy body. This ball bullet gun shoots 6MM bullets from this PUBG inspired gun toy. The gun comes with 100 bullets so kids are never running short of the shots. The gun comes with a stand to keep it stable when taking a shot from the ground, a laser light for night vision shooting, and a magazine to fill up the bullets in.

Amitasha's real life looking mouser gun gives kids a great experience when at play. The gun has a laser light for night shooting, which makes it a fun toy for outdoors even at night. The gun is 100% safe to use for kids. It comes with 50 ball bullets, which kids enjoy playing with. The gun gives good accuracy when shooting at static targets.

This gun toy comes with army print that makes it look like a fighter gun. It comes with music and flashing lights that keeps the kids entertained. The 360-Degree moving ammunition, infrared laser light and sound effect makes it a must buy.

Buying Guides For The Best Toy Guns For Kids Online

When looking to buy a toy gun for your kid, there are some important things to keep in mind.

LIST OF THE BEST TOY GUNS FOR KIDS IN INDIA