Get your hands on one of these Fitbit bands to better monitor your health and fitness. 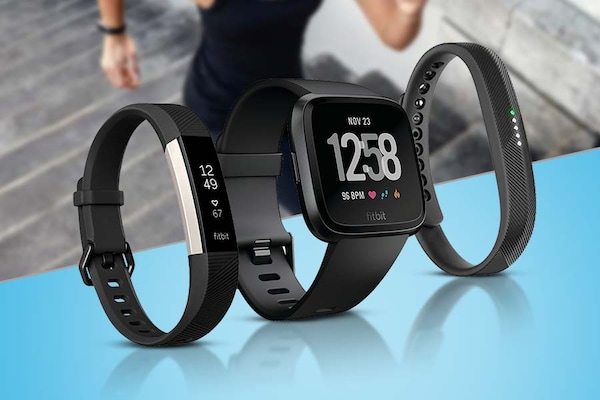 In a market flooded with various Fitbit bands, it can be hard to find the one that's right for you. Every device has something different to offer, and no one device can please everyone. So we've done all the legwork to give you a quick rundown of what's what, be it Fitbit Versa or Fitbit Charge. Whether you're clueless about what's on offer, on the fence about what to get or need help cementing your decision, our comparison guide and smartwatch reviews may give you some clarity. Keep scrolling to know about some of the best-selling fitness bands from Fitbit.

The Fitbit Charge 3 is the best fitbit band in India on all counts – it tracks your steps, calories and distance, reminds you to move when you're stagnant, lets you control music, shows you call/text notifications, allows you to make payments and more. In a nutshell, it has everything you may need, except for on-screen workouts and in-built GPS. The device is swim-proof for up to 50 metres.

The Fitbit Versa 2, like the Fitbit Versa its predecessor, has everything you need and more.The only feature missing is built-in GPS, which shouldn't be a deal-breaker if you have a phone to connect to cellular GPS with. You could also store about 300+ songs in it and control using your Spotify subscription. Compared to other Fitbits, Versa 2 looks and operates more like a smartwatch, featuring a larger screen with a more vibrant LCD display and a sleeker aesthetic. Make payments using Fitbit Pay.

Just 15mm in width, the Fitbit Alta HR is easily one of the best looking Fitbit bands. It's a good buy if you want the whole range of activity-tracking features –  including heart-rate monitoring with  PurePulse technology – without any frills. Lets you track sleep, too. Lightweight and stylish, this model is very popular among women, who make 80% of its user base.

The Fitbit Ionic has every feature you can ask for – calorie counting, distance measuring, breathing guidance, notification pop-ups and more – except for cellular GPS (which it replaces with built-in GPS). So if you're heading out sans phone, this is the Fitbit for you. It has a sporty aesthetic, so we're declaring it the best fitbit band for serious sports people.

The Fitbit Flex 2 might be the simplest and sleekest Fitbit band there is. Slim and swim-proof and if you're looking for a quiet option that isn't jampacked with features, giving you basic activity-tracking features for when you're exercising. Its sleek aesthetic comes at a slight cost though –  the battery life isn't all that great. Fun band colours available.

Track your all day activities using this sleek and slim activity tracker from Fitbit. Fitbit Inspire is just apt for everyday wear as it lands light and soft on your wrist and does its job well. Aiming for those fitness goals this swim proof, 5 day battery life smartwatch will be a great companion. Track your sleep, burnt calories, steps and heart rate all in this designed for life best smartwatch from Fitbit.

For the latest deals, offers and news, follow HotDeals360 on Facebook, Twitter, Instagram, Google News and subscribe to our YouTube channel.
The HotDeals360 team writes about stuff we think you'll like. HotDeals360 has affiliate partnerships, so we get a share of the revenue from your purchase.
Topic
best fitbit band best fitbit band in india best fitbits in india fitbit in india
More From Smart Wearables
Advertisement
Follow Us
Fear of Missing Out Best Deals?
Subscribe to our newsletter. Now!
Trending
Latest
Quick Links
Trending
Latest