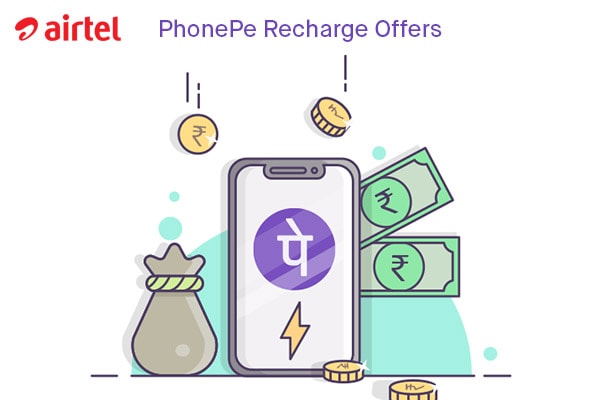 Airtel PhonePe Recharge Offers And Bank Offers
After 8 long months of struggle Airtel users will now be entitled to pay their bills and recharge their numbers using PhonePe on Airtel. Earlier in January this year Airtel has stopped accepting payments from e-wallets. The company sought to consolidate its online payment interface and provide security to its users. Airtel had planned to redesign its payment interface and incorporate all wallets on its website. Following the process of interface the Airtel users were unable to make payments using PhonePe on Airtel. Airtel confirmed that the company was facing trouble to redress the complaints against failed transactions from these wallets. “When there is a transaction failure during phone bill payment (with a bank), there is a streamlined redressal mechanism, customer care service, 24*7 call centre and immediate reversal of paid amounts. But with wallets that is not the case. We are finding it difficult to deal with wallets and might have to re-think our digital strategy,” Airtel had said. However now Airtel users once again will be able to use Airtel PhonePe recharge wallet to make recharges and pay their bills. With the company integrating its payment options it has become easier for the customers to choose their preferred PhonePe wallet on Airtel as a mode of payment for recharge.

Use these Latest Mobile Recharge Offers To Avail The Best Discount:

Since Phonepe Airtel have joined hands once again they plan to come with even more exciting offers and cashbacks for their customers.
For the latest deals, offers and news, follow HotDeals360 on Facebook, Twitter, Instagram, Google News and subscribe to our YouTube channel.
The HotDeals360 team writes about stuff we think you'll like. HotDeals360 has affiliate partnerships, so we get a share of the revenue from your purchase.
Topic
Airtel PhonePe Recharge Offers Phonepe airtel bank offer PhonePe App Payment options
More From Utilities
Advertisement
Follow Us
Fear of Missing Out Best Deals?
Subscribe to our newsletter. Now!
Trending
Latest
Quick Links
Trending
Latest