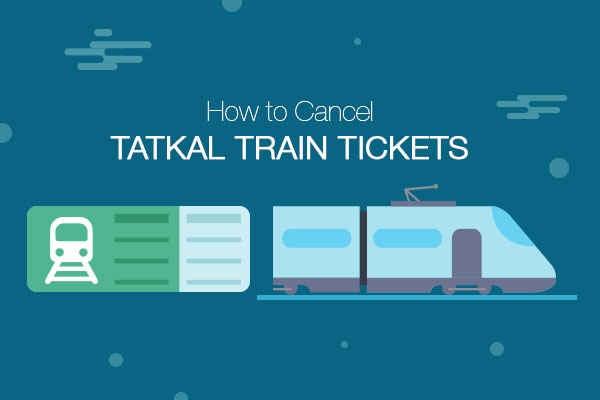 Tatkal Ticket Cancellation Process, Steps And Charges
Travelling through train in India is itself a wonderful experience. Crossing through the lush green fields, over the mountains across the lakes, the train journey gives you the best of all. However train travel in India can sometimes be intimidating. It can at times be really confusing to navigate through the Indian Railway system, but once you have figured it out Indian Railways isn't that bad. One of the biggest hassles for people who seek to travel by train is that it is always overbooked and busy. The best and the wisest hacks in this case would be to know your itinerary and book ahead, but there are times when we plan to travel all of a sudden in this case booking a tatkal ticket would be a good option. The easiest way to book train tickets is to do online by visiting IRCTC. There might also be times when it becomes difficult to execute your prior plans or there might be some sudden change in the plan and you would wish to cancel the tickets. Here we will let you know all about the tatkal ticket cancellation process and the tatkal ticket cancellation charges. The rules for tatkal ticket cancellation process and the ticket cancellation charges may vary.

As mentioned earlier no refund is provided by IRCTC on cancellation of confirmed tatkal e-ticket.

In case you have a confirmed tatkal e –ticket but the train you wish to travel is running late by 3 hrs or more you can claim your refunds on cancellation of confirmed tatkal e-ticket from IRCTC by filing a TDR request on IRCTC's official site.

On cancelling your RAC/Wait List Tatkal e ticket 30 min prior to the scheduled departure of the train, the traveller is entitled for full refund in lieu of a minimum charge of Rs 60/- by IRCTC.

After you have followed the tatkal ticket cancellation process a cancellation message would be sent you on your registered mail id and mobile number.

If your plans have changed and you have followed the process for tatkal ticket cancellation process, the train tickets booked online or offline can now be cancelled offline as well as online. The charges on cancellation of confirmed tickets (link this to the story on ‘Cancel Counter Train Tickets Online) may vary depending upon cancellation period and class of travel. Here is a brief of cancellation charges of confirmed tickets:Inspite of the country developing so much and train travel being so popular amongst the people of India, there are many who still are not aware of many policies of IRCTC and are fooled by the travelling agents. Thus get to know all about cancellation of confirmed tatkal e-tickets and waiting ticket cancellation charges and avoid yourself from being fooled by the travel agents.
For the latest deals, offers and news, follow HotDeals360 on Facebook, Twitter, Instagram, Google News and subscribe to our YouTube channel.
The HotDeals360 team writes about stuff we think you'll like. HotDeals360 has affiliate partnerships, so we get a share of the revenue from your purchase.
Topic
Tatkal Ticket Cancellation Process steps to cancel train tickets online train ticket cancellation
More From Utilities
Advertisement
Fear of Missing Out Best Deals?
Subscribe to our newsletter. Now!
Trending
Latest
Quick Links
Trending
Latest