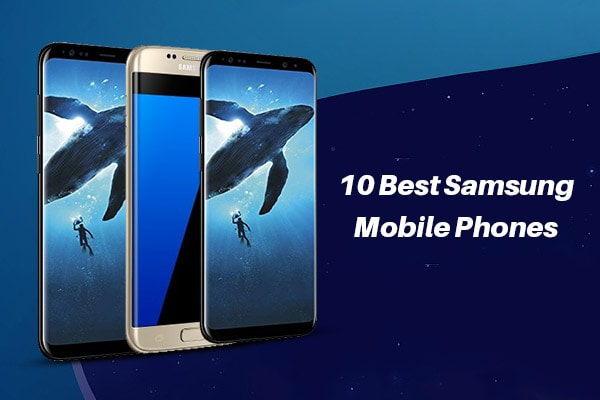 One of the leading mobile phone brand in the country is Samsung, offering phones ranging from Rs.999 to Rs.70,000. Samsung has captured the Indian market from people of every house. Being one of the most prominent smartphone providers in India, Samsung has given us some very amazing and unique phone with unique display and camera and sensors. Samsung has generously marked its importance amongst its customers by offering best Samsung mobile phones at pocket-friendly prices.

With a wide number of choices currently available to us we have brought you 10 best Samsung mobile phones. Also look at :
Best Mi Phones
Best Vivo Phones

Samsung being one of the popular mobile brands in India, is known to offer best quality and performance. Checkout top features due to which Samsung became popular among users.

For Samsung lovers, we have brought some best Samsung smartphone available in India, which are worth your purchase.

Samsung Galaxy J8 was launched early this year; this one of the best Samsung phone features a 6 inch screen. Inspite of the large screen size the phone is light weight and is quite slim to fit in any pocket. This one phone from Samsung that features dual rear camera of 16MP and 5MP and the 16MP front camera also does fairly well. The geo tagging, touch focus and face detection makes it even better.

Samsung Galaxy A6 Plus

The Samsung A6 Plus aims to attract the millennial, who are very hastily moving towards multimedia and social media phones that feature a good display, camera, support for latest apps and has brilliant specs as well. Oriced slightly above the average market the phone is sure not to let down its users.

Launched early this year the Samsung Galaxy A8 Plus is yet another one of the best Samsung phones in the A series. The Galaxy A8 Plus incorporates a version of Samsung's most talked-about flagship named as the Infinity Display. The Galaxy A8 Plus is the first phone to feature the company's tall 18.5:9 Super AMOLED display apart from its flagships Galaxy S8, S8 Plus and Galaxy Note 8. The phone also features IP68 water and dust resistance along with the Always-On display features that work really well with OLED screens.

The Samsung Galaxy J2 is stylish yet strong and comes with 2GB RAM and 16GB internal storage. Known to be one of the best Samsung phones, the Galaxy J2 features a 5-inch screen with 540 x 960 pixels resolution and is powered by quad core processor. This trendy smartphone from the house of Samsung supports two micro SIMs and packs a battery capacity of 2600 mAh.

The Samsung Galaxy On6 features a 5.6 inch HD screen with super AMOLED display with an aspect ratio of 18.5:9. Powered by an Exynos 7870 octa-core SoC, 4GB RAM and 64GB inbuilt storage capacity the phone performs fairly well. The micro SD card slot supports up to 256GB of expandable memory. As far as the camera is concerned a13-megapixel rear snapper of f/1.9 aperture, LED flash, and an 8-megapixel front camera of aperture f/1.9 with LED flash are just the things you would look for in the best camera phone.

The Samsung Galaxy J6 holds to be one of the most affordable phones launched in the budget range by Samsung this year. The phone comes in two RAM and storage configurations with 3GB/32GB and 4GB/64GB. It is one of the best phones from Samsung by far and is competent to compete with the Chinese counterparts. The Galaxy J6 seems to be a power-packed proposition in the budget smartphone segment.

An excellent 6'3 inch infinity display with an amazing resolution of 1440*2960, this phone is definitely the best Samsung smartphone till now. Its S pen is exceptional and appealing too. With amazing cameras and processor and battery and ram and storage, this is the next level of smartphones.

A massive 6'2 inch display featured with 4gb of ram and 2.3 GHz powerful Exynos processor, this is another phone with a jaw drop looks. Being the latest of Samsung's S series this is definitely amongst the best Samsung mobiles.
It has the unique retina scan unlock feature which has increased the security one notch higher. This is also waterproof so feel free to take stills or make videos underwater.

Just the smaller variant of the S8 plus, even this is the best Samsung smartphone.
This one has a display of 5'8 inches powered by 2.3 GHz Octa-core Exynos 8895 processor and runs on 4GB of RAM. This one is also waterproof with an amazing display, camera and everything this is just perfect in its range.

Its edge display, water and dust resistance and fingerprint scanner made it popular. It is still one of the most favorites amongst the youth and so is one of the best Samsung mobiles. It has a quad HD display of 5.5 inches with 534 ppi.

The smaller brother of its edge version, the galaxy s7 is packed with everything similar to that of the Galaxy S7 Edge except the curved edge display.
Perfect for gaming with perfect hardware gives a pro gamer feels without any lags and the 3600mAh battery adds more fun to it by providing it enough juice to last all day long.

the phone is packed with 6gb of ram and an octa-core processor by Qualcomm.
This 6-inch phone plays different apps on the same with ease due to its 6gb of ram, it easily restores your app sessions and starts from where you left. Its unique 6gb ram brings it amongst the best Samsung phones.

This smartphone is a mid-range budget smartphone with a 5.7-inch display and a resolution of 1080*1920 pixels. Its 2.2 GHz octa-core Qualcomm Snapdragon 625 processor along with 4GB of ram makes its user experience an amazing one.

Yet another 6inch massive display phone by Samsung is powered by a massive battery of 5000mAh. You can get over with the entertainment but not by the battery. Its battery is what makes it the Samsung best mobile phone.

Its side speakers are what makes it different than the other best Samsung mobile phone. It has simple classy looks and is available in 2 colors, black and golden.

This budget range phone is definitely a camera phone with 16-megapixel front and rear camera. Such beautiful innovations by Samsung and at this price definitely makes it one of the best Samsung mobile. The screen size of 5.2 inches with 3gn of ram and a 3000 mAh battery seems to be a perfect match.

Buy
The list shown above covers the Samsung best mobile phones which are not only great in offering performance and quality but are also worth every single penny.