Apple cider vinegar is the new super ingredient that many are turning to for its multiple uses and benefits. From food and beverages to beauty packs, it is becoming part of various recipes. Find out the many ways you can use it in, and some of its acclaimed health benefits. 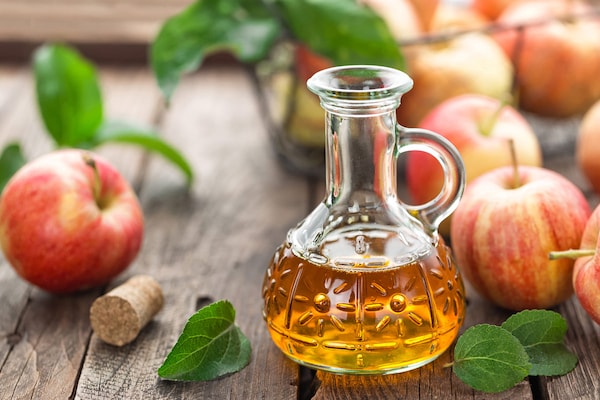 Apple cider vinegar can be used in many creative ways, but one must only use its diluted version

Apple cider vinegar is all the rage among culinary enthusiasts in India, lately. In Europe, though, this kitchen ingredient has always been part of pantries in homes and restaurants, alike.

From salad dressings, fruit coatings to sushi toppings, and even in marinades and chutneys, apple cider vinegar is used in numerous ways and has many health benefits. People even drink up its diluted version as a weight loss measure, and it is also part of many DIY beauty hacks. It is also used as a surface disinfectant.

Thanks to the many health benefits and uses of apple cider vinegar, it is apt for use by adolescents and adults alike, for whom its advantages can be as refreshing as its taste. Its smell, though, is quite infamous. Many find apple cider vinegar to be rather pungent, and avoid using the ingredient solely because of its hard-hitting smell. Yet, broadly, people are only increasingly attracted to this super ingredient, which is comparatively new in the Indian market.

But, what really is this exotic ingredient and how can you use it to your advantage in everyday life? Here is what some professionals, who work with the ingredient often, have to say.

What is Apple Cider Vinegar?

“Apple cider vinegar is simply vinegar made from fermented apple juice; but it is different from regular vinegar due to its fruity flavour. It is packed with high acetic acid content and other nutrients with zero calories. It has no fat, carbohydrates, and even protein or fibre,” Swapnadeep Mukherjee, Head Chef at The Metropolitan Hotel & Spa in New Delhi, shares with us.

“Apple cider vinegar is increasingly finding a place in modern kitchens in India due to its various medical properties and health benefits. People's preferences for gluten-free and healthy drinks are on a rise, giving a push to its demand,” Mukherjee goes on to say. 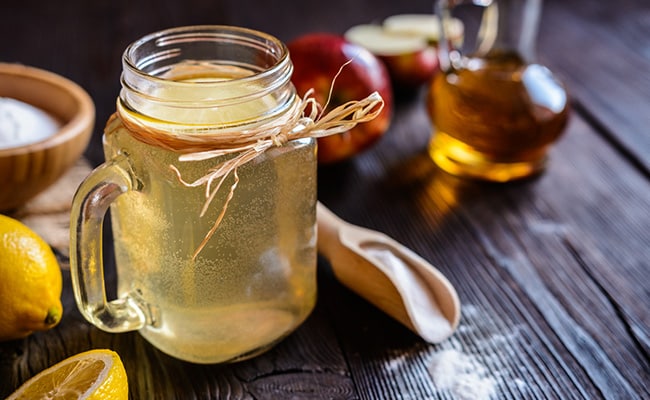 There is no arguing that the Indian populace is increasingly becoming more health conscious, with people on a constant look for healthier food and beverage options. Not just at the dining tables, people are also looking for healthier alternatives in bars, and there is an increase in demand for low alcohol content beverages, making room for apple cider vinegars even on bar-tops.

But, before you choose to give it some space in your kitchen, know the apple cider vinegar in all its good and bad, and how you can use it.

“Due to the fermentation process using which apple cider vinegar is made, many probiotics are developed in it, making it highly beneficial for the gut health of a person,” says Mehak Khattar, a nutritionist and health consultant from New Delhi who works with various health and fitness brands as a consultant. A former dietician at a leading hospital chain in the capital, Khattar goes on to share some of the most important benefits of apple cider vinegar, which include -

Apple cider vinegar is especially beneficial for people suffering from diabetes or type2 diabetes as it prevents sugar spike after having meals. Its consumption leads to less sugar absorption by blood. Khattar recommends it to be consumed 25-30 minutes before a meal in small quantities for beginners - 1 tsp in 100 ml water, and slowly upto 1 tbsp maximum.

Weight loss has always had its fair share of fans, and with a spike in  desk jobs, they have gained further traction. In this scenario, apple cider vinegar comes to the rescue by suppressing cravings, boosting metabolism, improving immunity, preventing fat accumulation, and even helping with digestion issues. “People with digestion disorders should surely consume apple cider vinegar as it increases an enzyme called pepsin in the body, which helps in breakdown of protein,”affirms Khattar.

Apple cider vinegar can also help lower cholesterol and triglycerides levels, which are again at a spike, in general, in today's fast-paced lifestyle It further improves insulin sensitivity, which also aids to reduce risk of heart disease.

Being acidic in nature itself, apple cider vinegar helps soothe the acidic feeling in stomach. A natural alternative to digestive pills, if you will!

5.  Beneficial for PCOs and PCODs

6. Beneficial for skin and hair

Apple cider vinegar does help cure acne, the dietician confirms; and can be used as a toner. Due to its antibacterial and antifungal properties, it leads to improved skin texture. It is also known to treat dandruff and scalp infections. For hair, there are apple cider vinegar shampoos that can prove to be a ready solution.

Side Effects of Apple Cider Vinegar and Suggested Precautions

Apple cider vinegar should not be given to kids under 15 years of age.  For those on medication, it's best to consult a doctor prior to its consumption. “And if one experiences symptoms like nausea, burping or reflux after consumption, they should stop taking it and discuss the symptoms with a doctor, says Khattar. These symptoms may be because of the acidic nature of apple cider vinegar that could be reducing potassium levels in the body, suggests a report.

How to Use Apple Cider Vinegar 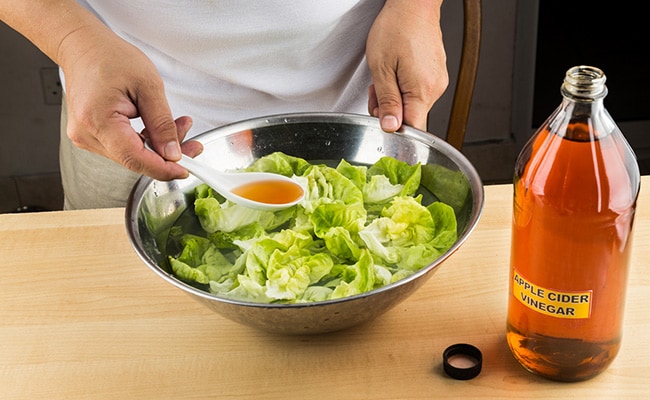 If you are a beginner, then start with consuming 1 tsp only in 100 ml lukewarm water. You can also add pure honey in it if you wish to. This shall also help heal sore throat. However, whether consuming it or using it externally, make sure it's in diluted form, as its acidic content could be harmful when consumed or applied raw.

“One should not consume undiluted apple cider vinegar as it may harm the throat and oesophagus,”re-instates chef Mukherjee from The Met.

If you are wondering which brand to go for when shopping for this fruit vinegar, try Apologize Health Cider Vinegar or Wow Life Science Organic Vinegar, which are easily available in the market.

Pro-tip: “add a little bit of this ingredient to your meals, and preserve them for longer, while also making them a taste a bit fruity,” suggests Mukherjee.

Q. How to use apple cider vinegar for cleaning?

A. People have traditionally used vinegar for cleaning as it can help kill many a bacteria. Other than disinfecting surfaces, vinegar can also be used for treating nail fungus, lice, and warts.

A. Vinegar inhibits bacteria like E. coli from growing in and spoiling food, making it an ideal preservative. And using apple cider vinegar not only helps preserve food, but also lends its fruity flavor to the dish.

Q. Which apple cider vinegar is the best?

A. There is a huge variety of apple cider vinegar available in the market, but one must prefer to buy only the organic ones.