Priya Prakash Varrier has groped everyones attention by her priceless expressions. Find how this "Wink Girl" became the internet's newfound obsession in our story below. 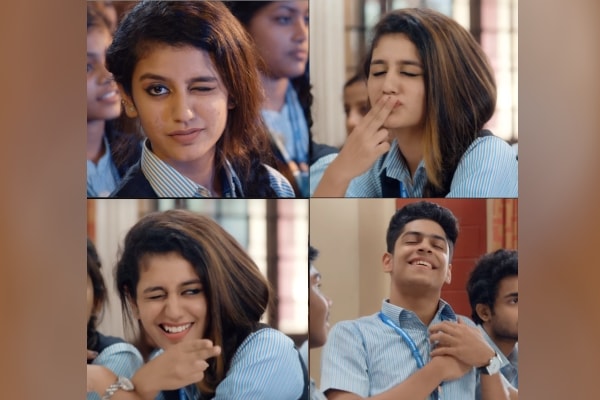 These days the social media is going gaga over a Malayalam actress named Priya Prakash Varrier. She is leaving the youth awestruck by her awesome expressions, not only amongst the boys, the expressions of this overnight internet sensation is being loved by the girls equally. Her videos on YouTube had gained popularity overnight. This is video is from her upcoming Malayalam movie Oru Adar Love. The special part of this video is that it is released in the season of love encashing the popularity on the occasion of Valentine Day. The chemistry between Priya Prakash and her co-actor Roshan Mohhamad is also becoming the heartthrob for the youth and school going students and college graduates are crushing over her.

These days songs from Mollywood (Malayam Film Industry) are catching up the trend on internet first it was Sheril G Kadavan, who became an overnight sensation with the viral video of Jimmiki Kammal, and now it's Priya Prakash with her videos from an upcoming Malayalam movie "Oru Adaar Love". This trending Mollywood number has been sung by Vineeth Sreenivasan, and composed by Thalassery K Refeeque, the tune to the music is set by Shaan Rahman. Checkout the song Manikya Malaraya Roovi featuring Priya Prakash Varrier and her co-actor Roashan Mohhamad below:

The expressions by Priya Prakash Varrier and her co-actor Roashan Mohhamad is stealing the heart of several pinning Romeos. The song is set in a school premises where a musical band is performing, and the students in the audience are reacting to the singers and each other. The 18 year old young actress Priya Praksh Varrier is amongst the students and can be seen asking a friend to occupy the space next to her, meanwhile the actor Roshan Mohhamad catches her eye and the two of them exchange love glances and flirt with each other through their awestruck expressions. The video is going viral over internet and the internet Nazis have now begun to publish a number of memes and edited videos along with her fan page.

After that breath-taking wink and cute nod, in the second video you can see Priya shooting some flying kisses towards the boys and teasing her co-actor Roashan Mohhamad with the same. To get your school memories revived in the most romantic way, checkout the official teaser of Oru Adaar Love video below, as this reminds you of the cute love teasing which most of us has gone through during our school days.

Priya Prakash Varrier has become the third celeb in the world to have crossed 600K followers on Instagram in a single day. The other two celebrities who ruled the internet in a single day were television star, Kylie Jenner with 806k followers in 24 hours and footballer Cristiano Ronaldo with 650k followers in a day. She is definitely joined the race and ready to create a history already.

Shop For Beauty Essentials To Get The Priya Prakash Varrier Look:

Obsessed with Priya Prakash Varrier and want to look like her? Worry not, we've got yoru back to keep you sorted with all the beauty essentials to shop her nude look and bold-kohled eyes.

1. Make Your Eyes Turn Expressive With  The Boldest Dark Kajal

3. Lift Your Lashes With Top-Selling Mascaras

5. Keep it Natural With Nude Lipsticks

Shop the best cosmetics in order to look like Priya Prakash Varrier and whoo your beloved ones with your natural dewy look.