Taj Mahal, known to many as a symbol of love and an architectural marvel comes attached with a string of rich history entwined with the diverse Mughal heritage. Find out how to book tickets to this paradise made of marvel, waiting to astonish you with its magnificence. 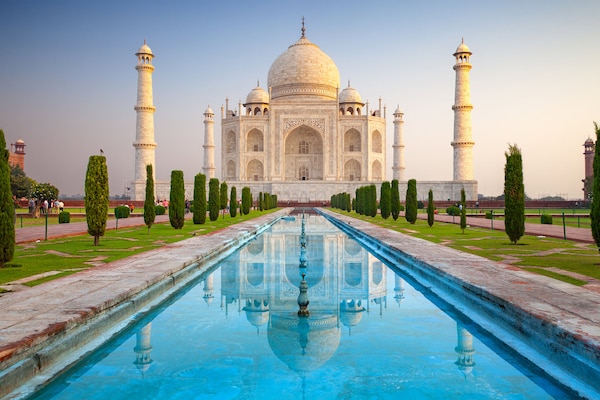 Taj Mahal, the finest mausoleum built on the lines of Mughal architecture, is known around the globe for its beauty, magnificence, and finely crafted marbles. The gorgeous monument stands pretty across the banks of river Yamuna and writes poetry with its reflection on the glittery waters, each evening. Viewed across the pages of the history of history and literature through a romantic lens, Agra's Taj Mahal is a result of 22 years of the tireless dedication of as many as 20,000 of the world's fine artists, masons and carvers. Thanks to the relief of online ticketing, you can now easily book your tickets online and behold the beauty of this historic masterpiece. Read below to find out more about the history of Taj Mahal, the ticket prices, online booking, and some interesting facts.

Taj Mahal, one of the Seven Wonders of the World, dates back to the 17th century. It is believed that Shah Jahan, the then Mughal emperor, built the mausoleum in the memory of his beloved wife Mumtaz Mahal. As per some historians, it was on her deathbed that the gorgeous empress asked Shah Jahan to build a mausoleum of such fineness that no one had ever seen before. It was in 1631 that the construction finally began and select artisans, carvers, inlayers, stonecutters, painters, calligraphers, dome-builders and other artists poured in from across the empire as well as Iran and Central Asia. Shah Jahan had set his eyes on the finest marble for the construction of Taj Mahal and did not shy from spending over 32 million rupees for the same. An epitome of love, Taj Mahal took 220000 labourers and 1000 elephants for completion, a detailed process that took 22 years.

*Taj Mahal Southern Gate is currently open only for the exit.

Below are the ticket prices for visiting the Taj.

The official Archaeological Survey Of India approved websites for booking the online tickets are  asi.payumoney.com & www.asiagracircle.in.

How To Reach Taj Mahal

Agra Airport is approximately 7 km from the main city centre. Indian Airlines operates flights to Agra on a daily basis.

Agra is well connected to the rest of the country with the rail network.

The main trains connecting Agra with Delhi are Palace on Wheels, Shatabdi, Rajdhani, and Taj Express.

The main bus stand of Idgah is well connected with major cities including Delhi, Jaipur, and Mathura. Frequent bus services connect these cities. Once in the city, visitors can hop on to local transportation services include taxi, tempo, auto-rickshaw, cycle-rickshaw. For adventure seekers, horse-driven tongas are also available. However, petrol and diesel operated vehicles are not permitted in the vicinity of the Taj Mahal.