Find out all about vitamin K - its role in your body's functioning, benefits, and food sources for it. Create a healthy diet with food combinations that are rich sources of vitamin K. 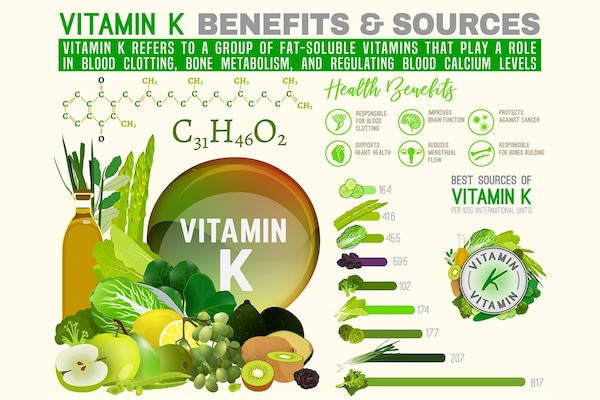 Unlike vitamin D and C, people usually do not seem to taking supplements for vitamin K, or even paying attention to its regular intake. Vitamin K sources are important for the body to produce certain proteins such as prothrombin that help with blood clotting. Blood clotting is necessary to control excess bleeding in case of an injury. Vitamin K also helps produce osteocalcin, a protein that aids bone health. Here are the vital details, you must know-

Newborns usually have a vitamin K deficiency, for which they are given a shot soon after their birth. The World Health Organisation recommends that all newborns should be given one microgram of vitamin K intramuscularly after birth (i.e. after the first hour by which the infant should be in skin-to-skin contact with the mother and breastfeeding should be initiated).

Vitamin K deficiency is rarely found in adults, but may be found in people taking medication for blood thinning. Although vitamin K  is a fat soluble vitamin, which can easily get dissolved in the body, people with mal-absorption problems could face its deficiency, as their body would block the breakdown and absorption of this vitamin.

Vitamin K is a group of compounds, and the most important of these compounds are vitamin K1 and vitamin K2. While vitamin K1 is seen in heavy quantities in green leafy vegetables and some fruits, vitamin 2 can be sourced from eggs, meat, soy beans and other dairy products. Include the following rich foods in your diet for your daily dose of this vitamin.

Vitamin K is taken orally in rare cases. This is a fat soluble vitamin, which means even if taken in large quantities it gets excreted out through the urine. For adults, the right amount of intake of vitamin K is about 120 micrograms, and for children below 10 years it is below 60 micrograms.