Mathematical Games For Kids: Befriending The Numbers At A Young Age

Mathematics, one of the most feared subjects can be familiarised to the young minds in a fun-filled manner through engaging games. Needless to say, they enhance analytical skills and learning abilities too. Here are some of the best games on mathematics, that'll come handy for your little geniuses. 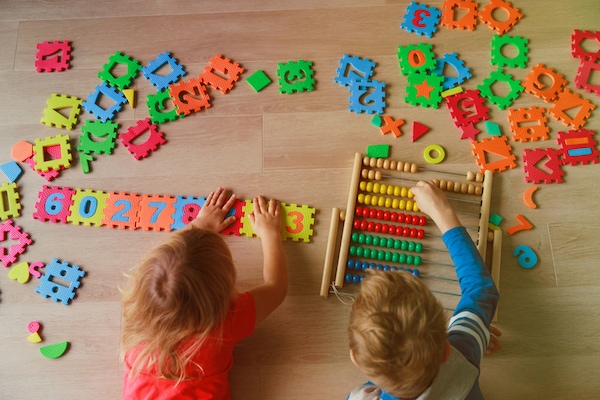 Mathematics, one of the most logical subjects, enjoys a special status not only because of its wide applications in everyday life but also for its impact on the human mind. As confirmed by science, mathematics not only enhances analytical and problem-solving skills but also sharpens an individual's ability to handle unfamiliar tasks confidently. Though the subject may seem intimidating at first, it can be introduced to kids through a variety of fun-filled games. Not only do these games help in seeding the fundamentals of the subject in young minds, but also hone other skills including logical reasoning, concentration and even picking up a new language. Here are some of the mathematical games that'll introduce your kids to the magical world of numbers.

Puzzles and basic mathematical problems are both known to enhance problem-solving abilities, concentration, visual discrimination, logical reasoning, as well as spatial awareness in young minds. Now seed this skill set with them through this fun and engaging game that combines puzzles with basic maths. Children first need to select a picture puzzle and the corresponding play board. If their puzzle pieces have a number sentence imprinted on it, they need to look for the correct solution on the playing board and vice-versa. As the pieces of the puzzles are combined properly on the board, the beautiful picture puzzle gets solved! The game comes with 25 puzzle pieces, three playboards and special dice.

Enjoyed by the kids and adults alike, this interesting card game comes with a quirky twist. Like any other card game, the mission cards are distributed equally among the players. These cards need to be gotten rid of by arranging the fingerprint tokens in the form of an equation, such that it solves to give the number on the mission card. As the player decodes the equation, s/he can get rid of the card and the first one to get rid of all their cards is declared a winner. Interestingly, the numbers imprinted on fingerprint tokens are only visible through decoder glasses. The game not only brings tons of fun to the table but also helps in building active memory, logic, strategy, attention, focus, concentration and quick thinking.

The concept of fractions not only lays the foundation of complex mathematical functions including algebra but is also useful in understanding the concept of portions in daily life. This fun-filled game introduces young minds to this intriguing concept of fractions in an enjoyable manner. The players need to match the number of cards with a given fraction to the corresponding pictorial or graphical representation. The activity book included in the game also puts on the platter a variety of activities including memory games that help in building up the concept of fractions as well as in enhancing visual discrimination, concentration, and problem-solving skills.

This interesting card game comes with a quirky mathematical twist. For each turn, two cards with various equations imprinted on them are picked up from the deck and are kept upfront. The players need to solve these equations mentally and find a solution common to both these cards. The player that gets decodes the common answer first, get to keep both cards and as the game proceeds, the player with the maximum number of players is declared a winner. Not only is this a fun game for picnics and gatherings, but also helps in enhancing creative thinking, cognitive development and visual perception, besides sharpening the mental math skills.

Get ready to have an assured dose of adrenaline rush with this fantastic game! It comes with a set of foam dice and playing mats. The players need to roll the dice and jump as many mats, without touch the ground, as the number flashed by the dice. This fun game not only ensures an enjoyable playtime off the grid but also helps in practising early math concepts, number recognition, problem-solving and other visual-spatial skills including leaping, coordination, and judging distance.

Benefits Of Math Games For Kids

Mathematical Games For Kids: Befriending The Numbers At A Young Age