The Best Waffle Makers: A Complete Guide To Deliciousness

Waffles are a favourite of many. Easy to make, they are a confectionary delight. Treat yourself to some warm waffles. Shop from this list of the best waffle makers and waffle moulds. Also, scroll down to get your hands on a recipe, some premixes, and fun facts about this European/ American delight! 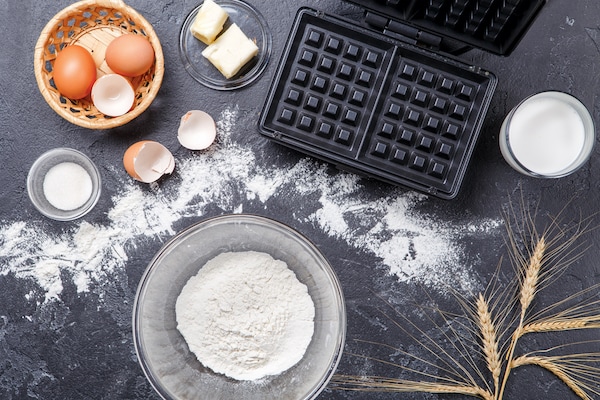 Waffles, a warm and gooey confection, are an international hit. Found in breakfast buffets in fancy hotels across the world, they can also be enjoyed in tiny cafes in various neighbourhoods. Originally a delicacy from Belgium, they are also commonly associated with American food, where they were first introduced during a world fair, and were then adopted in a slightly different version.

These delicious desserts are now a commonplace even in India, and a favourite of many. If you're craving some waffles, scroll down to get your hands on some of the best waffle makers and some classic recipes.

Also, find out the difference between Belgian and American waffles, so you can relish what you most like. It's time to delve into some deliciousness. 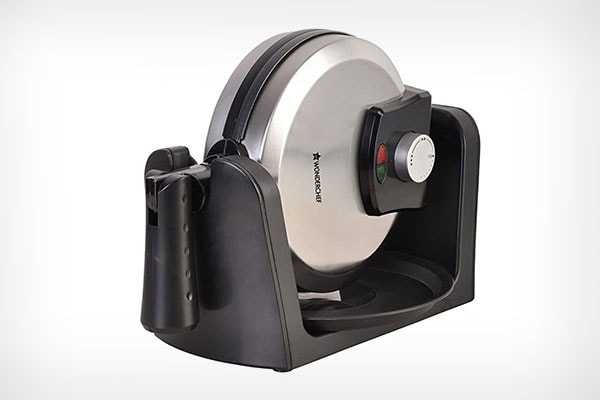 This waffle maker from Wonderchef is all you need to prepare delicious waffles, in a hassle free manner, in the comfort of your home. It features an easy-to-operate rotating handle for even and uniform baking on both sides of the waffle. The handle can twist to 180 degrees, allowing users to cook waffles to the desired crunch. The handle is also cool to touch, making it easy to use. There is also an adjustable thermostat for browning settings, so users can monitor their waffles well, and achieve the desired browning. Adding to the pleasure of cooking are non-stick plates, so home bakers and chefs need not worry about the batter sticking onto the machine. This waffle maker is surely a modern machine that will change the way you make waffles at home. 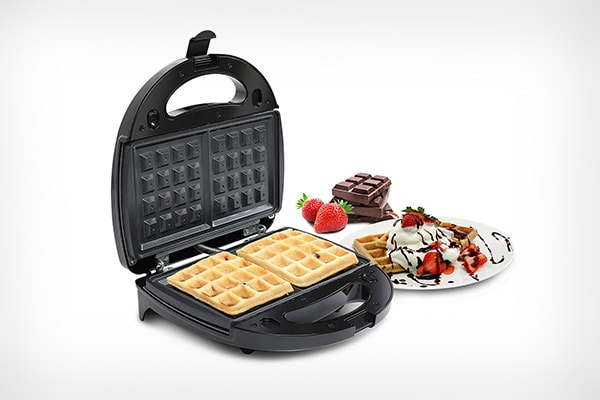 Why just make waffles for breakfast, when you can use one single machine to prepare some sandwiches or toast breads and veggies, as well? This three-in-one machine lets you lay down the breakfast of champions, and that too with minimal effort. This rather humble looking machine comes with three detachable plates that can be used to prepare both sweets and savouries, so you can enjoy a complete meal. Its plates, like that of any good waffle or sandwich maker, are non-stick coated, so users don't have to worry about a tough time cleaning post the meal. The non-stick coat also means that the oil or butter used can be much less in quantity, thus making sure the many food items prepared don't add up for excess calories.

Easy To Use And Carry 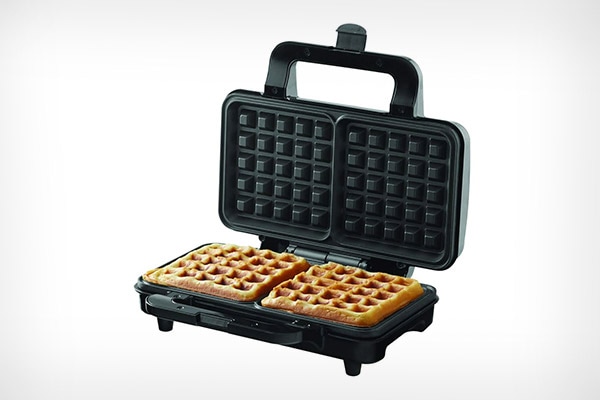 Borosil is a brand name that speaks for itself, having been in the marketplace for a very long time now. It is a brand that multiple generations identify with and put their trust in, when it comes to kitchen appliances. This waffle maker from Borsoil is yet another product you can choose to bring home, without having second thoughts about its quality. This classic looking waffle maker features non-stick plates that can be used to make two waffles together. These heating plates open to 90 degrees, making the machine very simple to use at home. The 1.4 m long cord is long enough to add to the convenience of users. The waffle maker also features a power and heating indicator, so users can monitor the waffles well and prevent overcooking or undercooking them. 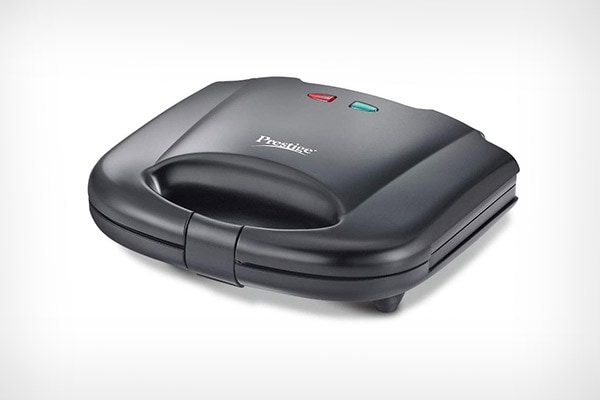 A trusted name in home and kitchen appliances, Prestige brings to you this sturdy and easy-to-use waffle maker so you can enjoy a plate full of home-made waffles. This is a no-fuss machine, sporting die-cast plates. Die cast plates are made using metals and are thus stronger and durable than plastic plates. The plates are also heat-resistant and non-stick coated, so users can enjoy some oil-free baking. 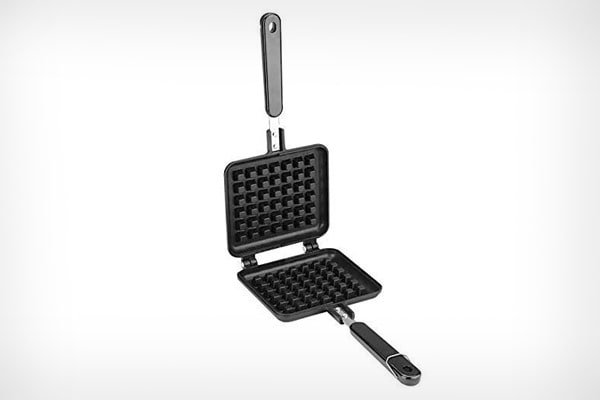 For those who would prefer a charred or smoky flavour in their waffles, a handheld waffle maker like this one could help a big deal. Just pour in some of the waffle batter in it, shut it close and put it on a burning stove. Make sure you keep turning it, so you don't overdo one side of the waffle, or worse, burn it! Give an edgy flavour to your sweet waffles with this non-electric appliance. 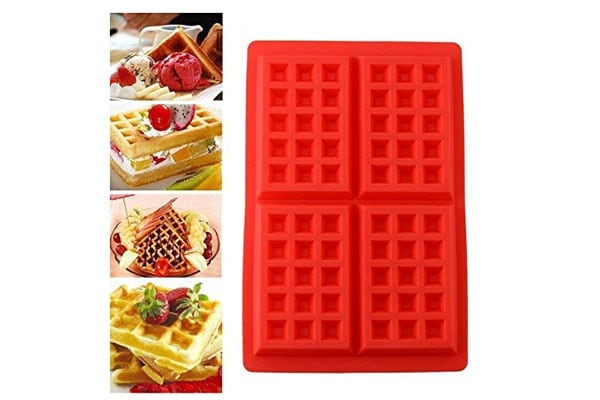 For those who would rather bake their waffles than cook them, waffle moulds are the go-to option. One tray of this silicone waffle mould can bake upto four waffles in one go. This tray does not leak colours or odours, so you can be sure of the colours and flavours being intact. The waffle mould is also easy to clean and store. It is also dishwasher safe. 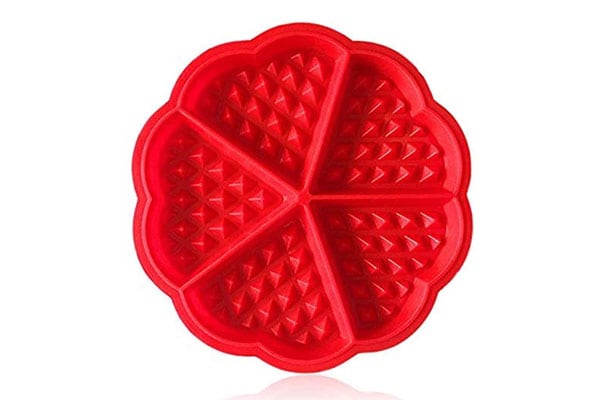 Bake up a storm with these heart shaped waffle moulds, and enjoy waffles that are not just tasty but are also pretty-looking. This waffle mould is made from 100% food-grade silicone that adheres to FDA silicone food safety standards; so you can be sure the silicone is not leaking any chemicals into your food! Not just non-toxic, it is also odourless, easy to clean as well as microwave, oven, refrigerator, freezer and dishwasher safe. You can also use it for baking cakes, cookies, candies and more!

How To Make Waffles At Home?

Making waffles at home is no big deal, even if you are a novice in the kitchen. The ingredients that go into making waffles can easily be found in a pantry or home kitchen, and if not, then can surely be procured easily.

You can also opt for ready-to-cook waffle premixes. All you need to do is add some water, milk or curd to these (read instructions on packet for that), and the batter is ready. Here are some best waffle premixes you can buy from.

Where did waffles originate?

Waffles hail from Belgium, a European country nestled between France, Germany and The Netherlands. This small country is big on its culinary scene, and is also known for its fries, chocolates, beers among other delicacies and drinks. The commonly relished Belgian waffle originated in Brussels, the country's capital, but there is also the lesser known Leige waffle from the city of Leige.

What is the difference between Belgian and American waffles?

What are Liege waffles?

Liege waffles are even more robust than a traditional Belgian waffle. They are thicker and tougher, and not that perfectly shaped. Their texture is similar to that of breads, as they are made using yeast dough instead of traditional a batter. They are thus not as airy or lightly textured as the Belgian or even the American waffles. However, their taste is often described as intense, and they boast of pearl sugar, which are like sugar bullets added into the dough. Upon cooking, these sugar pearls melt and caramelize, adding a whole new dimension to waffles- both in means of texture as well as flavor.

Can we make waffles without a waffle maker or waffle iron?

Yes. A sandwich maker or griller can be used to make waffles. You may, however, miss out on the traditional square pockets, and instead get a flat waffle. Waffle moulds are another option and are similar in nature to cake moulds. These will also give you the quintessential waffle squares. Waffles made in waffle moulds are of course baked in an oven, and not cooked.

Are waffle and pancake mix the same?

Although the batters for pancakes and waffles share some common ingredients such as flour, sugar, and butter, their batter is not the same. The proportion of the ingredients differs, starkly. Waffles usually contain lots of butter and more sugar in comparison to pancakes.

The Best Waffle Makers: A Complete Guide To Deliciousness