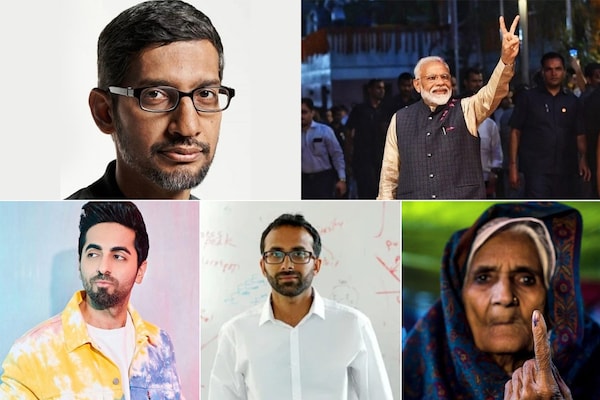 TIME magazine has released its list of 100 most influential people in the world in 2020, and the list stars some popular Indians such as Prime Minister Narendra Modi and Bollywood actor Ayushmann Khurrana. Indian origin tech biggie and CEO of Google Sundar Pichai is also on the list, and so is Professor Ravindra Gupta, famed for 'curing' an HIV patient. To the surprise of many, the list also features 82-year-old Bilkis, the lady who had emerged as the face of Shaheen Bagh protests earlier this year. Below are details about how these Indians made it to the famed list.

After failing to make it into the list in the year 2018 and 2019, this year, the Indian prime minister has been listed among some of the most powerful leaders of the world such as US President Donald Trump, Chinese President Xi Jinping, and Taiwanese President Tsai-Ing-Wen. The PM had featured on the list in the year 2014, 2015, and 2017 also. In the last few years, Modi has taken some difficult and controversial decisions such as demonetisation, abrogation of article 370, and the introduction of CAA (Citizenship Amendment Act) as well as established stronger 'friendships' with various world leaders, often making global headlines.

Google and Alphabet CEO Sundar Pichai has also been included in the list of the world's 100 most influential people of 2020. Jamie Dimon, The CEO of JPMorgan Chase and Company nominated Pichai's name by writing a tribute for the latest edition of the magazine for praising work ethics and vision. Dimon said, "Sundar Pichai's uniquely American story: emigrating from India as a young adult and working his way to becoming CEO of USD 1 Trillion corporation represents the best of what we aspire for our society."

Professor Ravindra Gupta, a biologist of Indian origin has also made it to the list. Gupta is known for leading a study that lead to the recovery of Adam Castillejo, the second person to have been saved from the deadly Human Immunodeficiency Virus or HIV. Castillejo belongs from London, and in a tribute to Gupta, called him "thoughtful and passionate."

Actor Ayushmann Khurrana was nominated by Bollywood actress Deepika Padukone, who is also the founder of Live Love Laugh Foundation for mental health. As an actor, Khurrana has delivered outstanding performances with movies such as Andhadhun, Badhai Ho, Article 15, and Shubh Mangal Saavdhan. In the last few years, Khurrana has built his own image by doing some unconventional roles perfectly.

The most surprising name on the list is that of Bilkis Bano. The 82-year-old protested against the Citizenship Amendment Act (CAA) by dedicatedly taking part in the Shaheen Bagh protests in Delhi. From December 2019 to March 2020, Bano protested against the controversial act and became a symbol of peaceful protests.