As offices shift their base to the web and meetings through video-conferencing become the new normal, a touch-free hardware series has been launched by Google for the corporate setups. 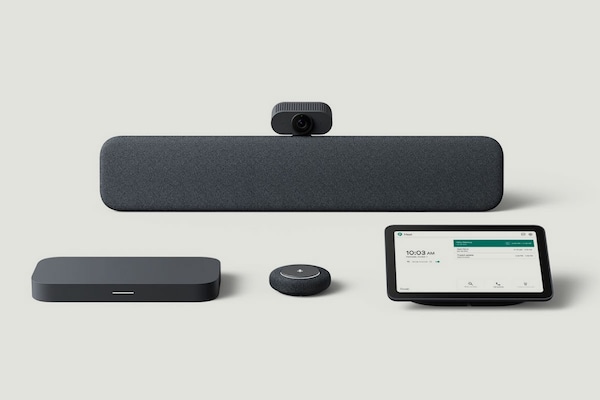 The hardware will facilitate touch-free video-conferencing in corporate setups

Google Meet is one of the most used video-conferencing applications, which has observed a huge surge in the user base during the pandemic. With entire industries going digital, the dependency on video applications was natural to manifest, and the trend is more than likely to stay in the post-pandemic world, as well. Striking at the opportunity, Google has launched a hardware series for making video conferencing easier, and touch-free, in partnership with Lenovo.

Designed especially for offices, the hardware largely consists of high-end cameras, soundbar with eight mics, and a touch-free remote.

On the table have been put a standard 12MP smart camera, a  20.3MP smart camera XL for bigger conferences, and a 4.3X zoom camera. These high-tech cameras can sense the number of participants in a meeting without facial recognition and detect frame participants. Additionally, these smart cameras are equipped with features like zoom, tilt, and digitally pan. The number of mic pods and audio bars too can be increased as per requirement. Thanks to the True Voice technology, these mics can significantly amplify human voices and cancel out other noises such as that of typing or noisy snack bags. The Smart Audio Bar requires a total of eight beam-forming microphones. The largest kit configuration can process up to 44 channels simultaneously.

"All Series One room kits take advantage of the same tech used in Google's data centres, built right into the Meet Compute System and Smart Audio Bar," he further assures.

To ensure smooth processing, the entire set up will come up with two Google Edge Tensor Processing Units and are powered by a Chrome-based “Meet Computer System”.

Depending on the kit that the customer buys, the meetings can be controlled with a rechargeable remote control or a 10.1 inch touchscreen, both of which support Google Assistant, facilitating hands-free meeting controls.