This International Tiger Day has good news in store for India. The land of heritage has upped its tiger count by a third and is now home to 70% of all the tigers found globally. 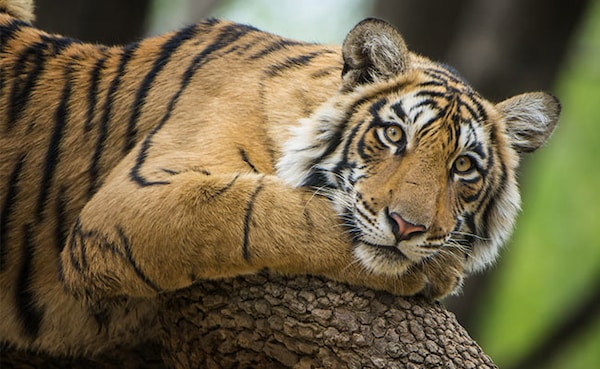 International Tiger Day 2020: 70% of the world's tigers are now found in India

This year's tiger count report has brought with it a wave of rejoice and proud for Indians. Now home to 2,976 of these wild cats as compared to 2,226 in 2014, India has upped its tiger count by a third. India now is home to 70% of all the tigers found on Earth.

“India is now one of the biggest and most secure habitats of tigers,” rejoices Narendra Modi, the Prime Minister of India on International Tiger Day.

A detailed report on the subject was also released by the Union Minister of Environment, Forest and Climate Change, Prakash Javadekar and Minister of State Babul Supriyo, recently.

This year seems to be lucky for India in terms of international attention and appreciation as far as the tigers are concerned. India's Tiger Consensus of 2018 made international headlines earlier this month with its world record of conducting the largest ever camera-trap wildlife in the world, and now the ‘All India Tiger Estimation Report' is being appreciated.

Taking a step forward, India for the first time, included tiger abundance within pockets in tiger reserves and sex ratio of tigers in all camera trap sites, in its report. The report also comes with abundance index of co-predators and other species and detailed anthropogenic effects on tiger population.

State-wise, Madhya Pradesh leads the list with 526 tigers, followed by Karnataka (524) and Uttarakhand (442). Except for Mizoram and Chhattisgarh, which observed a dip, all other states have reported a “positive” increase.

Amongst the reserves, Uttarakhand's Corbett Tiger Reserve has the highest count for the second time in a row, with 14 tigers per 100 sq km, followed by Kaziranga, Nagarhole and Orang tiger reserves.

The Journey So far And Ahead

With rampant poaching and chopping down of jungles, the tiger count in India had started dipping dramatically, around a century ago. Between 1875 and 1923, some 80,000 tigers were killed as per the official records and the scenario continued to worsen.

A strict wildlife protection law had to be implemented in 1972 which tightened the rules even for sever conflict encounters with tigers and made it virtually illegal to kill or capture these orange beasts.

A year later, an ambitious plan in the name of Project Tiger unfurled which chalked out plans for protecting tigers and restoring their count. Nine tiger reserves were officiated at that time.

It was, however, almost three decades later in 2006, when the project unlocked great success. With every tiger count, the number of these wild cats upped and the trend continues till date.

However, India still has a long way to go. As per one of the estimates, tigers breed and live in only about 10% of India's total potential tiger habitat of 300,000 sq km (115,830 sq miles). With rampant deforestation and clearance of green patches, the threat still looms over the fate of Indian tigers. With their homes dwindling, the cases of tigers entering human settlements have also raised over the years.

Illegal poaching is another challenge. The situation severed during early days of lockdown with an unprecedented spike in tiger hunting. Nearly 88 poaching incidents were reported during the lockdown period from March 23-May 3, as confirmed by Wildlife Trade Monitoring Network. The number is almost double the count reported during the six weeks before lockdown.