To promote Make in India as well as Vocal for Local initiatives, Indian telecom operator Reliance Jio has launched JioMeet, a video calling app that can be used instead of its foreign counterparts. 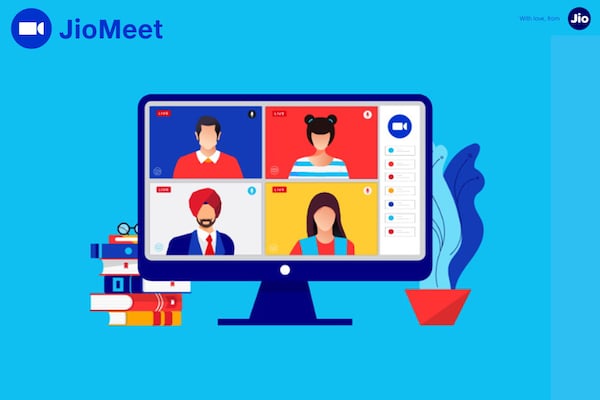 After entering into a deal with Facebook, Mukesh Ambani's telecom company has launched JioMeet, an app that can be seen directly competing with popular video calling apps Zoom, Google Meet, Microsoft Teams, and others.

Zoom had gained massive popularity during the lockdowns that were imposed across the world to contain the spread of the new coronavirus. During this period, the app witnessed substantial growth in its usage, be it for work from home meetings or online classes for children.

After the Indian government's ban on 59 Chinese apps, JioMeet can be seen as an Indian alternative to the popular video calling apps of Chinese origin.

In April, The Ministry of Home Affairs (MHA) warned the Zoom app users, as this video-conferencing app was being considered unsafe for usage.

Indian government had announced an innovation challenge for Indian app developers and had urged them to develop an alternative to the video calling app Zoom.

In contrast to Zoom's unsafe usage, JioMeet claims all the meetings are “encrypted", on its official website. After the LAH tensions, Prime Minister Narendra Modi's "Aatmnirbhar Bharat" is gaining resonance in the country amongst the masses.

Everything You Need To Know About JioMeet

While previously, JioMeet was in the beta phase and was introduced only to a small group of people, the video calling app has now been rolled out for both Android and iOS users.

JioMeet has emerged to be a direct competitor to Zoom, as it offers an unlimited number of free video and audio calls in high definition (720p) to its users. It supports upto 100 participants at once and stays uninterrupted for up to 24 hours. It has a similar interface than that of the Zoom, where users can simply use a ‘meeting-id ' or a 'personal link name' to join a meeting, without having to sign in.

As we all know that e-meetings are here to stay, JioMeet can contribute to provide users with free team collaboration and a seamless video calling experience.