Robots can now be seen taking control in operation theatres in India, giving new dimensions to the healthcare sector. But most of these robots are imported and add immensely to the operational costs as well as the medical bills. With medical robots now being made in India, this is set to change.
By: Ishaan Singh
Updated: Feb 05, 2021 15:01 IST 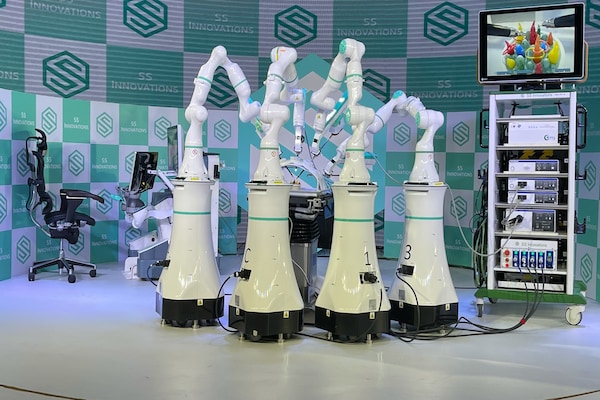 Surgeries using robots have been conducted in India for more than a decade now, with both government and private hospitals using 72 such systems in total. However, these robotic systems in India are imported from other countries and none of them are made in India, because of which their cost amplifies.

Taking note of the need of a robot supported surgery infrastructure in India, Dr. Sudhir Srivastava, global expert in robotic cardiac surgery has developed a surgical robot in India, under his establishment - SS Innovation. The robot has conducted nearly 18 successful surgeries, at a cost that is one-third of the systems provided by leading global competitors.

“Robotics shall be the future of surgery, and my vision is to create a technologically advanced system that will be cost-effective, easy to use, and can be applied to all surgical specialties. Compared to conventional surgery, robotic surgery results in smaller incisions, that reduces pain, scarring and leads to a quicker recovery,” says Dr. Srivastava, Founder, SS Innovations.

The concept of remote surgery was explored by NASA in the 70s to perform surgeries on astronauts through a surgical instrument that was controlled remotely by a surgeon on earth. This did not gain much attention back then.

However, another goal of robotic surgery - that was to eliminate unwanted motion during the process was highlighted and the first surgical robot, Puma 560 was used in 1985. All it could do was help with stereotaxic operations through computed tomography, and was a breakthrough.

Robotic surgeries have come a long way since then and surgical robots are being used by many reputed hospitals around the globe. These robots help with surgeries ranging from prostatectomies to gynecological. They are designed to facilitate surgery using a minimally invasive approach and are controlled by a surgeon through a console that's connected remotely to the device.

In India, a major issue with procuring and using these robots has been the cost. Currently, these robots cost anywhere between INR 18-19 crore as they're imported from the U.S, which makes it difficult for a lot of hospitals to get them.

In January 2021, SS Innovation launched their first product, “SSI Mantra” an acronym for multi-arm novel telerobotic assistance. The robot can perform all specialty surgeries except orthopedic and it will be the first-ever surgical robot in India that can perform cardiac surgeries.

This system is modular and flexible when it comes to upgrading or replacing a particular part or component of the robot, which is not the case for most other medical robotic systems out there.

The software for these robots is written in C++ and XML which run on Real-Time Operating System (RTOS) using EtherCAT for communication.

These robots can operate on patients remotely with a surgeon using the console.

The doctors will be trained for these robots in a variety of ways. They will have didactic training sessions with the company to familiarise themselves and their team with the system.

They'll set up multiple training centers in different regions of India where they can further develop their skills, through the utilization of OMNI studios, more experienced surgeons will have the opportunity to tell mentor the junior surgeons while performing operations.

As these robots are tried and tested over and over again, they have a failure rate of 0% and it's stated that whenever there's a failure it is because of the human factor involved and not the machine. If the system malfunctions there is an emergency shut-off switch that will stop the entire system.

The best part about these robots is that they cost about INR 5-6 crore, which is 1/3rd of the price that robots manufactured in the U.S come at.

As of now, this product is being used by the Rajiv Gandhi Cancer Institute (RGCI), New Delhi and will be available at various other hospitals this year.

“The system will ensure less trauma, shorter hospital stays, and faster recovery. MANTRA robotic system in India will open up a whole range of medical technologies and robotic surgeries available to the Indian population. MANTRA system has been designed and manufactured in India in partnership with Andhra Pradesh MedTech Zone,” says Amitabh Kant, CEO of government think-tank NITI Ayog.