Jio Fiber has announced new plans starting from as low as Rs. 399, with "no condition 30-day free trial". Some of these plans also offer free access to 12 famous paid OTT platforms including Netflix, Amazon Prime, Zee 5, and Alt Balaji. 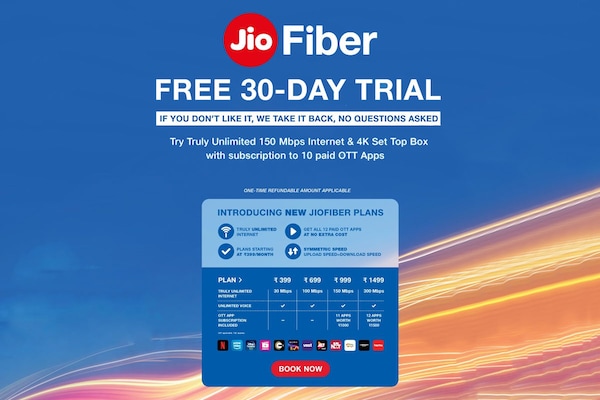 New Jio Fiber Plans have stirred the telecom market once again. One of the fastest-growing networks in India, Jio seems to have access to the magic mantra for luring in customers. Having played a big role earlier in popularising unlimited call and data packages, it has now unveiled some new, irresistible recharge plans starting from a dirt-cheap price of Rs. 399.

Interestingly, the plans for Rs 2,499 and Rs. 8,499 are quite similar to the previous plans and have not changed much. The Platinum Jio Fiber plan price, however, has tumbled from Rs. 3,999 to Rs. 3,499. All these plans, for the first time, will be having symmetric speed; in layman's language, the download speed will be the same as the upload speed.

Users can test the utility of these plans through a “30-Day No Condition Trial”, also floored in the market for the first time. During this free trial users will be able to enjoy up to 150 Mbps speed and a 4K set-top box with a subscription to 10 OTT applications at no extra cost, besides the anticipated free voice calling benefits.

However, Jio will be charging a security deposit of Rs. 2,500 and Rs. 1,500 from customers depending on whether they opt for 4k set-top-box. Only the former security deposit entails ITT benefits. The customers can opt-out of the service anytime during the trial, though.

Jio has also thrown open the option of migrating to the new plans for existing subscribers.

In a scenario of large chunks of the population turning to fixed broadband internet, thanks to the pandemic-driven work from home policy, the move is likely to play in the favour of Jio.