Vizag LG Polymer gas leakage kills more than 10 people and several other reported to be sick. Though the situation is under control, the government has urged the people to stay indoors and use masks and cover their face with a wet cloth while moving out in case of emergency. 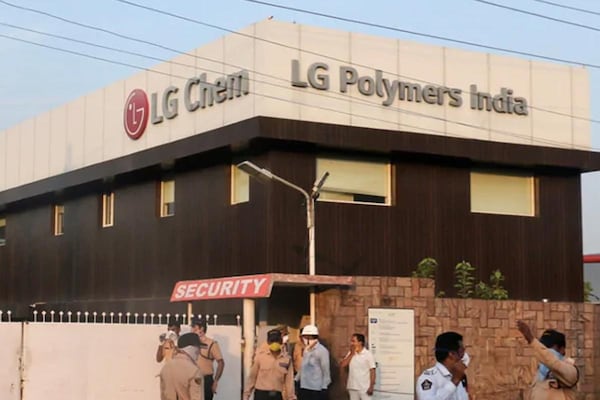 As per the latest updates more than 10 people including senior citizens and children have been killed and several are reported to be sick after harmful gas leak took place in an LG Polymer factory in Vizag. The leakage happened around 3:00 AM. The incident led to panic around the Polymer factory in RR Venkatapuram near Naiduthota area close to Gopalapatnam.

While many people were seen lying unconscious on roads, some came up with complaints of rashes and itching in eyes and skin. People around the area have also complained of breathing problems too.

Soon after the matter came to light, the local police and authorities reached the affected areas and started with the evacuation of the locals. Though the situation is under control now, yet, emissions haven't stopped entirely. In their efforts to subdue and neutralise the impact of the leakage 500 kg of Para-tertiary butyl catechol (PTBC) chemical is to be airlifted from Daman and brought to AP amidst the lockdown.

The CM of the state Mr Yediyurappa has expressed his grief over the situation and has announced that the state would be offering Rs 1 crore each to the family members of the deceased. The PMO and Home Ministry too have expressed their condolences towards the family of the deceased and have urged the people of the state to stay calm and not panic as the situation can worsen. The Andhra Pradesh government has also ordered a probe into the matter.

Train services have also been disrupted due to the gas leak incident. More than nine Shramik Special Trains that were run to ferry migrant workers back to heir home towns amidst Coronavirus lockdown have been impacted and movement of around 35 goods and carrier trains has also been disrupted as the drivers have complained of irritation and breathlessness.

It is believed that the gas leaked out of two 5,000 tonne tanks that had remained unattended due to the lockdown. The incident is being compared to the Bhopal gas leak tragedy which is considered to be one of the worst industrial disasters.

For the latest deals, offers and news, follow HotDeals360 on Facebook, Twitter, Instagram, Google News and subscribe to our YouTube channel.
The HotDeals360 team writes about stuff we think you'll like. HotDeals360 has affiliate partnerships, so we get a share of the revenue from your purchase.
Topic
LG polymers gas leakage Vizag Gas Leak Polymer Plant Gas Leak
More From News
Advertisement
Fear of Missing Out Best Deals?
Subscribe to our newsletter. Now!
Trending
Latest
Quick Links
Trending
Latest