Popular music composer and director Wajid Khan has passed away at 42. We take a look at how Bollywood is mourning the loss of this legendary musician, and some of his most popular works. 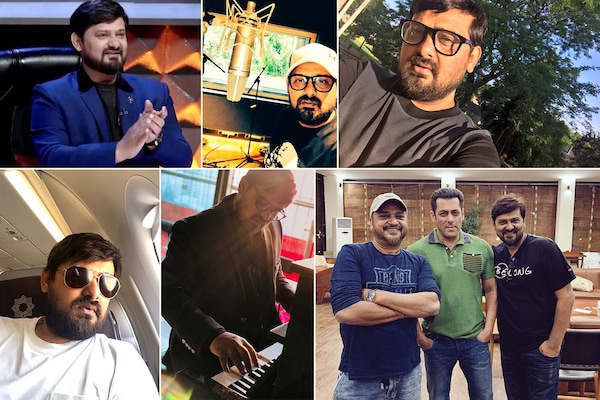 One of the most popular music composers of Bollywood, Wajid Khan has passed away at the age of 42. Wajid Khan, along with his brother Sajid Khan, had given the Indian film industry many hit songs. The duo has mostly composed music for Salman Khan and other top Bollywood celebrities. As per reports Wajid Khan was suspected of having the coronavirus, and was also suffering from kidney related ailments.

Wajid Khan was admitted at a hospital in Chembur, a suburb of Mumbai, after complaining of throat infection. The composer had also undergone a kidney transplant a few years ago. He succumbed to multiple ailments on Monday morning.

A music composer and director, Wajid Khan was said to be very close to actor Salman Khan. The Sajid-Wajid duo first composed music for Salman Khan starer superhit film Pyar Kiya to Darna Kya in the year 1998, and from then, there was no looking back for the two Khan brothers. Even during his last days in the hospital, Wajid Khan kept signing songs from Salman Khan's popular movies.

As soon as the news of his untimely demise surfaced on social media, through Sonu Nigam's post on twitter, condolences started pouring in from his fans and other Bollywood celebs. Wajid Khan has had pleasant relations with most of the Bollywood actors and singers. Salim Merchant in his conversation with a news agency said that he was put on ventilator support last week after a kidney infection got worse.

From Amitabh Bachchan to Priyanka Chopra and Varun Dhawan, many Bollywood celebrities have expressed their grief.

Shocked and saddened to hear about the untimely demise of #WajidKhan, talented and ever-smiling...gone too soon. May God give strength to his family in this difficult time ????????

An irreplaceable loss for the music industry. Wajid Khan will be missed deeply but he will live on through his music and the lives he touched with it. My heartfelt condolences to the family.????????

Rest in harmony my friend. Had the pleasure of working with both Sajid-Wajid most loving and brilliant. My condolences to his family and especially Sajid. #RIPWajidKhan

shocked hearing this news @wajidkhan7 bhai was extremely close to me and my family. He was one of the most positive people to be around. We will miss u Wajid bhai thank u for the music ???? pic.twitter.com/jW2C2ooZ3P

I used to call him my brother from another mother. Besides being unbelievably talented he was so gentle & sweet. I'm so heartbroken that I did not get to say Goodbye my sweet @wajidkhan7 I will miss you & our jam sessions forever. Till we meet again #RIP #WajidKhan #Gonetoosoon pic.twitter.com/RAq0pqHJwY

I still can't believe it... feels like yesterday we were doing sittings for Tevar. One of the warmest & most decent souls I had the pleasure of knowing. Always a smile on his face & a song in his heart... Thank You Wajid bhai for the music & the memories. ???? pic.twitter.com/VCchUaarJg

My Brother Wajid left us.

Terrible news. The one thing I will always remember is Wajid bhai's laugh. Always smiling. Gone too soon. My condolences to his family and everyone grieving. Rest in peace my friend. You are in my thoughts and prayers.@wajidkhan7

Devastated with the news of the passing away of my brother Wajid of Sajid -Wajid fame. May Allah give strength to the family ????

Wajid Khan has been laid to rest next to Irrfan Khan's grave at a cemetery in Versova, a  neighbourhood in Mumbai. As per reports, only two members from the composer's family were present at the funeral.

Music director Wajid Khan and his brother Sajid Khan are known for their compositions for popular movies such as Wanted, Dabangg, Ek Tha Tiger, and many others. Wajid Khan also did playback for popular songs like Mera He Jalwa, Fevicol Se,  Chinta Ta Chita Chita, and others. He also recently composed Salman Khan's Covid-19 song Pyar Karona and Bhai-Bhai.