One of the worst locust attacks in decades has hit India, when the country is struggling to fight a pandemic. The swarm invasion has brought authorities on their toes, and if not controlled, the pests could cause some serious damage to lives and livelihoods. 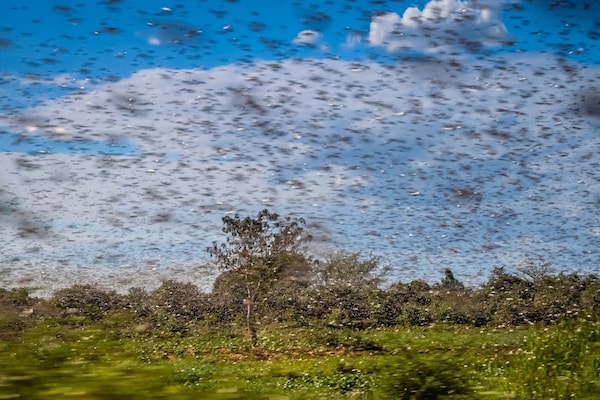 India is facing its biggest locust attack in 25 years, and it has some Indian farmers supremely worried. Locusts are large and aggressive swarms that devour crops. They are among the most destructive migratory pests in the world, and thus also have authorities fearing about the destruction they could cause.

Desert Locusts have invaded more than two dozen districts in India, covering more than 50,000 hectares of desert areas of western India. Rajasthan, Madhya Pradesh, and Gujarat are the worst affected states. Parts of Punjab and Haryana have also been affected, and it is being feared that the pests may migrate further.

Among all affected states, Rajasthan is the most affected, with more than 30 districts under attack. Here, pests have destroyed more than 4,00,000 hectares of land. In Madhya Pradesh also, the locust attack has become a headache, with crops in Ujjain, Chambal, Bhopal, and many other districts facing severe effects of this attack. The swarms have also reached Uttar Pradesh, where they have caused some damage in Jhansi.

After ravaging the crops of these states, locusts are reportedly heading towards other Indian states like  Delhi, and Maharashtra. Before entering India, the migratory pests had also ravaged many African countries, as well as Pakistan and Iran.

The swarm attack has knocked the door of these developing countries, when they are struggling to fight the COVID-19 crisis. The migratory pests are thus the new challenge that the governments in these countries have. To fight these pests, the union government has deployed insecticides and pesticides spraying drones, as with their aid, targeting locusts will become easy for authorities.

What Are Desert Locusts And How Much Harm Can They Cause?

The desert locusts are short-horned grasshoppers, which are very dangerous for crops as they sustain on such kind of green vegetation, and even flowers and fruits. Although desert locusts lead shy, solitary lives, they move in large groups, which are also known as swarms. A swarm can be as large as Paris or New York, and can consist of 40 million to 80 million locusts in each square kilometre. These pests are also best known for changing their behaviour, thus when their group becomes too crowded, they start acting as an individual instead of acting as part of a group. They are also considered dangerous because they can stay in the air for a long time and travel more than 150 km/day. They also have the ability to eat crops up to their own weight every day. The rainy season is a very suitable climatic condition for desert locusts to lay eggs. A Desert Locust lives for about 90 days and can reproduce rapidly.

What If Locusts Remain Uncontrolled?

If government authorities fail to control these pests, they will grow older and lay eggs in the desert areas of Rajasthan and Gujarat. Because of rainfall, moisture in the sand will make suitable conditions for pests to lay eggs and give birth to the second generation. Facing the second generation of pests could become one of the biggest challenges for our government. The damage they could cause, will have direct repercussions on many livelihoods, specially those of farmer and the associated workers.

Some reports also state that locust attacks are getting aggressive year by year. In past India has witnessed 25 locust plagues and upsurges that were recorded between 1964 and 1997. India also has a locust warning organisation that was established in 1946. This kind of surveillance body is extremely important as a locust plague could lead to immense shortage of food, and even famine in worst cases, if not controlled.

As per the United Nations, the current outbreak can be traced to the cyclone season of 2018-19 that brought heavy rains to the Arabian Peninsula, giving favourable climatic conditions for the breeding of these pests. The current swarms went undetected earlier, and thus are now in their third generation, rapidly spreading out into South Asia and East Africa.