Atal Bihari Vajpayee : Learn The Art Of Staying Atal from Atal ji's most popular books, biographies and poems. Listen to 2 of his best timeless speeches in remembrance of that powerful voice of India.
Updated: Aug 17, 2018 14:46 IST 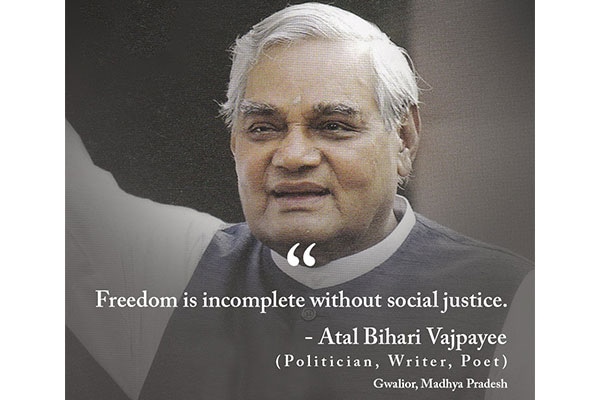 An outstanding parliamentarian, master orator, poet and liberal, Atal Ji was hugely respected across party lines. The whole nation mourns the death of this veteran leader. Born on 25th December 1924 Atal Bihari Vajpayee was not only a political stalwart but was also a great poet. One of the strongest pillars and forefathers of the Bhartiya Janta Party Vajpayee ji breathed his last breath on 16th August 2018. He was the first non-congress Prime Minister to have served a full term of 5 years in the office. Conferred by the highest civilian award The Bharat Ratna, India truly has lost a Ratna (Gem) in form of Atal Ji.

In a mesh of political dirt, a man untouched, unfazed honourable and so much more Atal Ji was one of the most respected politicians not only by the members of BJP but also the opposition. One of the greatest leaders of his own kind, Vajpayee Ji was admired by every Indian irrespective of cast, creed, age and political inclination. Let's have a sneak peek into some of the lesser known facts about Atal Ji who was a man of dignified words and silence.

He remained a Member of Parliament for 47 years, 11 times from Lok Sabha and 2 times from Rajya Sabha. One of the longest-serving parliamentarians, Atal Ji was in the opposition for almost 4 decades. He took the Hindi language international level by addressing the UN in Hindi. He was the first person to have spoken in Hindi at the UN. Vajpayee Ji was a man of values, who decried the divisive ideology of sections of his party men. He had a vision for the country and sought its rightful place in the comity of nations.

Here is a list of some of the most popular poem collections and biographies of Atal Bihari Vajpayee if you wish to have a further and detailed insight into his life and career.

The Untold Vajpayee: Politician and Paradox