Explore Mysteries Of The Universe And Outer Space With These Encyclopedias

The 13.8 billion-year-old universe carries in itself end number of mysteries. Unravel some of these with the hand-picked interesting encyclopedias on the subjects. 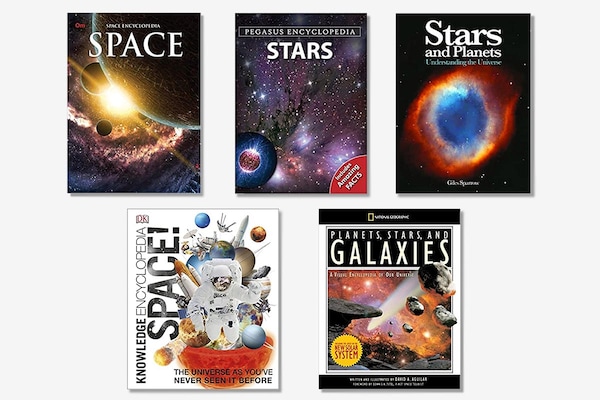 The 13.8 billion year old universe holds a plethora of secrets yet to be discovered by the mankind

Encyclopedias on the universe can be thought of as a ticket to the uninterrupted show of the astonishing mysteries of the outer space. As the pages of these insightful books flip, readers get a sneak peek into the unbelievable phenomenon occurring in this vast expense of nothingness, sprinkled over with stars, asteroids, comets, and planets all around. With constant ongoing research in the field, new secrets get added to the collection. Find some of these secrets in the hand-picked encyclopedias listed below.

1. Knowledge Encyclopedia Space: The Universe As You've Never Seen It Before

This informative encyclopedia comes with interesting science-backed facts on almost everything that falls under the vast expanse of the universe. From the secrets of black holes, supernovas and birth of a star to the advanced space stations- you name it and the book speaks of it. The encyclopedia also comes with detailed illustrations, and both real as well as computer-generated images that are enough to get a reader starry-eyed!

Knowledge Encyclopedia Space!: The Universe as You've Never Seen it Before

If you have been fascinated by the twinkling lights spread across the night sky, this encyclopedia is for you. From the formation, evolution, distribution, and characteristics of stars to the art of star-gazing, the encyclopedia gives a detailed peek into every sphere. The book comes with several attractive images, both real as well as computer-generated. Information blurbs with interesting facts have been included in this book.

3. Stars and Planets: Understanding The Universe

Shout out to astronomy enthusiasts! Discover the journey of the universe, post big-bang with this educative encyclopedia that gives detailed insights about 300 well-known planets, stars, constellations, moons as well as other cosmological phenomena, such as black holes and quasars. Each topic is supported with attractive photographs and illustrations, approved by the scientists. This fascinating read, with a pocket-size format, is a valuable reference source on the subject.

4. Planets, Stars, and Galaxies: A Visual Encyclopedia of Our Universe

This provocative and compelling read brings to the young astronomy enthusiasts all the latest discoveries in the field and interesting facts on the subject. It also touches upon the future of mankind in the outer space and includes an illustrated timeline of space research and exploration, star charts, moon maps, fact boxes, and helpful scientific diagrams. The book has been written in collaboration with experts from the popular educational channel National Geographic.

Planets, Stars, and Galaxies: A Visual Encyclopedia of Our Universe (Science & Nature)

A gripping read for space wizards, this encyclopedia seeds the idea of space and its observation in young minds along with accounts of famous cosmologists who contributed in the field. The book also explores the journey and experiences of astronauts who have had travelled in the space. It includes hundreds of images that render realism to the text and a plethora of interesting facts on the subject.

Explore Mysteries Of The Universe And Outer Space With These Encyclopedias