We've handpicked the best Mahabharat Books which you must read to have a better understanding of the popular Hindu epic- The Mahabharata. Shop these popular Mahabharata books online at best ever prices.
Updated: May 08, 2019 11:11 IST 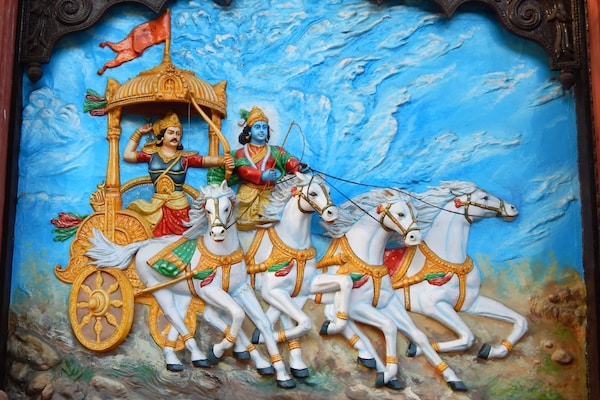 5 Books You Must Read For Better Understanding Of The Mahabharata

Woven with, rich culture, vast history and strong beliefs, Hindu Mythology narrates stories of the ancient land and its people. Among various narratives of Hindu Mythology, lies an epic that mirrors the foundation of Hindu beliefs and scriptures- The Mahabharata. ‘Mahabharata' essentially means, ‘the history of greater India'. What does justice to it being an ‘epic' is the aspect of multiple narratives within the text; Each character has a story and an integral role to play in the larger sequence of events, and the complexity within each character enhances the layered fervour of the epic.

The epic narrates the era of the Great War of Hindu Scriptures and the string of complex events that take place prior to it. The war takes place between the ‘Kauravas' and the ‘Pandavas', who are offshoots of the same dynasty, fighting to acquire the throne of Hastinapur which they each, deem their own. As per Hindu beliefs, this eighteen-day war led to the end of all creation. A war of this magnitude, is bound to have multi-faceted perceptions and points of view circling it, and it does!

There are retellings of the epic and various fictional versions of it as well, each bringing a new angle to the table, something that is imperative in order to comprehend a vast epic like the Mahabharata. Here are some books, written with unique structures, styles and angles, that are a must have on your reading list if you enjoy reading about the epic!

Popular Mahabharata Books You Must Read

Jaya: An illustrated retelling of the Mahabharata by Devdutt Pattanaik (2010)

Among other retellings of the Mahabharata, Devdutt Pattanaik's ‘Jaya' stands out as the author has incorporated local folklores and tales that are lesser known, while retelling the original narrative. The epic of Hindu Mythology is kept intact, while the inclusion of these folklores, enhance the read and bring new stories to the table. An epic as vast as the Mahabharata has different versions written and read across the world, but finding the right connect with certain folklores running alongside the original retelling is what makes this form of writing genius.

The book has a strong touch of personalisation with the addition of vivid illustrations and 250, line drawings painted by the author himself. Blending art with the narrative, the author has also incorporated certain aspects folk arts such as ‘Yakshagana' and ‘Pandavani'. A unique aspect of narrative structure that can be seen in the book is adding a section at the end of each chapter, which draws a parallel of the mythological narrative with astronomical information, making it a well rounded and informative read.

For people who have minimal knowledge on the epic, this book is a comprehensive retelling, by the end of which, you will know the essence of the epic through and through. It will also help you delve into a whole other dimension of astronomical information linked with it, making it a thoroughly engrossing read! Shop this popular Mahabharat book from the below link.

Mrityunjaya, The Death Conqueror by Shivaji Savant (Originally published in 1967)

‘Mrtunjaya' is a book that was originally written in Marathi but over the years, has been translated into languages such as Hindi and English by Nandini Nopany and P. Lal. The book has been written from the point of view of Karna, a very significant character of the Mahabharata. Karna is one of the most intensified characters whose entire life can be described as a series of unfortunate and unfair events. Abandoned at birth and then adopted by a charioteer and his wife, rejected by the noble Pandavas and accepted by the shrewd Kauravas as one of their own, this character is always at a loss one way or another. His capabilities are that of an exemplary ‘Kshatriya' (meaning: warrior) despite which he is discarded by society as an outcast. Not entitled to what truly is his birth right, Karna struggles throughout his life. He is the epitome of a tragic hero, and Shivaji Savant takes the reader through this journey of loss, sacrifice and loyalty, with his beautifully articulated narrative that is descriptive and almost feels like the auto-biography of this ever-so fascinating character.

This book happens to be one of the first fictional versions of the Mahabharata, which reflects the plight of a hero who is shunned away by society as per Hindu scriptures. What makes it a fascinating read is the aspect of it being a new insight into the story of the Mahabharata. We may be well-versed with the epic itself but engaging with one character in depth brings us closer to the narrative and enhances our comprehension of it.

The book is divided into parts where different perceptions are brought out, all circling Karna and his life. Shivaji Savant has delved into the world of one of the most intriguing characters of the epic, whose life resonates with sorrow, despite him being one of the most powerful and skilful beings. This Mahabharat book is a must have in your collection!

This is a book, that narrates the story of Karna, the tragic hero of the Mahabharata, through the eyes of his second wife, Uruvi. Kavita Kane takes the reader through a facet of the story which is lesser known- Karna's life beyond what we know and understand. Uruvi is a Kshatriya princess who was destined to wed the Kuru prince, Arjuna but chooses the Sutaputra Karna over him, for she falls immeasurably in love with him. She is shown as a constant guide and confidant of Karna's, who he reposes unflinching faith in. What makes this book unique is the perspective through which it has been narrated- Uruvi's. The story revolves around a relationship of true love surrounded by war, chicanery and deceit. The story progresses with the constant struggle to keep up with the world around, especially with the war between the Pandavas and the Kauravas, amidst which Karna gets caught and destroyed in the crossfire.

The book is a beautifully written and delivers as a narrative true to itself, from the heart of the Mahabharata. It also answers all questions about Karna that could have only been answered by delving into a perspective of a character like Uruvi. Kane successfully brings these characters to life, making it an eager read for all Hindu mythology lovers! Grab this popular Mahabharat book from the link provided below.

The Palace of Illusions by Chitra Banerjee Divakaruni (2008)

Chitra Banerjee Divakaruni is an award-winning novelist and poet. ‘The Palace of Illusions' is another book, that falls under the genre of historical fiction, as it retells the tale through the perspective of one of the core characters- Draupadi. Chitra Banerjee Divakaruni, has always been fascinated by the tales of the epic and ‘Draupadi's'. She strongly felt for all the cruelty the patriarchal society put her through. Her thought process and incentive behind writing a book such as this was solely because she wanted to give Draupadi a voice and to make people understand that contradictory to what they assume, the deeper story makes one realize that she did not have it all and led a life full of loss, vulnerability and loneliness.

The book takes the reader through the life of princess Panchaali. Another complex character, Draupadi, born from fire, always stood out from the crowd. Considered an enigmatic beauty, she was always the source of envy for most women and caught the glances of men. Her destiny being what it was, she is wed to not one but all the five Pandavas. In a time period where patriarchy was taking its form, she still stood out, marrying not one but five men. Panchaali goes onto being the trigger for something that had been inevitable for centuries- the great war. Chitra Banerjee Divakaruni takes the reader through a story of complicated confrontations, friendships, love and sacrifices.

This book is unique in its approach as it contradicts the perception of Draupadi built over the years of a woman who had it all, even though she was looked down upon for being a woman married to five husbands, she always had someone to fall back on. By the end of the book, you come to realise that she was in fact lonely. She may have seemingly had it all but through all the struggles, the love and respect she received was always divided and never whole. This book is an eye opener and beautifully carves its way into your heart. You can shop this one of the best Mahabharata book online from the below link.

The Palace of Illusions

The day the young Kshatriya shot at the fish's eye, a skilful warrior was born in Hindu Scriptures. Arjuna is one of the five Pandava brothers, who is regarded highly for his skills in archery. His confidant and mentor is Lord Krishna, who stands by him through time and also gives birth to what we know as the ‘Bhagavada Gita', in Hindu scriptures. This book written by Debashis Chatterjee brings to the table the story of the great warrior through his prime till his incredible loss.

Learning about the Pandava prince from a close lens brings into light many notions that could not be deciphered simply by reading the main narrative. It is a newer retelling of the epic but is beautifully retold. The narratives through his childhood, learning, marriage and old age- this book is an encapsulation of all that went both right and wrong with the noble man. This Mahabharat book is a book which must be read and re-read many times over!

An epic that has so much to offer, so many narratives, so many characters and oh so many emotions attached to it- The Mahabharata. The more you read about it the more you want to read about it!

For the latest deals, offers and news, follow HotDeals360 on Facebook, Twitter, Instagram, Google News and subscribe to our YouTube channel.
The HotDeals360 team writes about stuff we think you'll like. HotDeals360 has affiliate partnerships, so we get a share of the revenue from your purchase.
Topic
Mahabharat Books Mythology Books Books of Mahabharata Books
More From Books
Advertisement
Fear of Missing Out Best Deals?
Subscribe to our newsletter. Now!
Recommended
Trending
Latest
Quick Links
Trending
Latest