Book Review: Every Creature Has A Story by Janaki Lenin

Every Creature Has a Story by Janaki Lenin is a gripping read that explores the science behind amusing animal behaviours. It brings to the focus, the often ignored, yet fascinating parallel world of creatures around us. 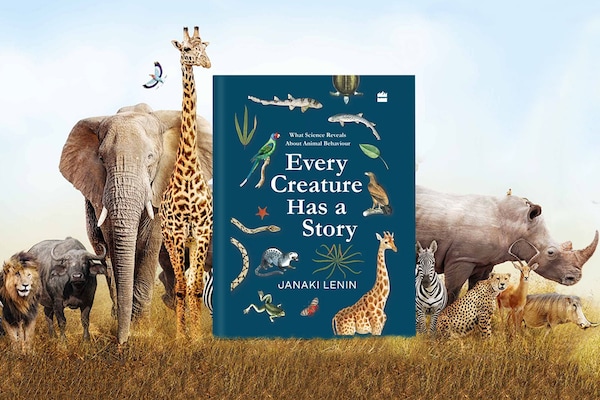 Every Creature Has A Story by Janaki Lenin

Did you know that nightingales gauge the commitment of a potential mate towards relationship through its singing stamina? Or that the death of a fellow chimpanzee leaves a deep scarring impact on the chimp minds? It is interesting questions like these which have been talked about at length in nature and wildlife writer Janaki Lenin's latest publication, Every Creature Has a Story.

A gripping read from the shelves of non-fiction science, Every Creature Has a Story is a fascinating read that explores the mysterious parallel world of creatures around us that often goes unnoticed. It wouldn't be wrong to call it a magical entrance to the enchanting world of everything living, backed by scientific facts, theories and researches. The book lies somewhere in the middle of complex scientific studies and interesting folklore or stories on animals as well as select plants.

The book has been divided into 50 chapters, with each one focusing on an amusing aspect of the animal kingdom. While some chapters ponder upon the structural aspects, such as the challenges a giraffe faces due to its long neck, others explore the provocative questions regarding the social behaviour including the selection of a suitable mate or reaction to the death of a group member. Some of the interesting topics covered include natural vaccination in bees, monogamy in rodents, altruism in humpback whales, the devotion of snake moms, prevalent laziness in some members of the ant colonies, sex drive in fish and female dragonflies feigning death to avoid coitus.

Each chapter begins with vivid imagery, keeping the curiosity and interest of the readers alive. As the narration proceeds, scientific facts are slipped in a lucid manner. The uncanny relation between the social behaviours and biological processes come across as fascinating. For instance, the monogamy in Prairie voles, the rodents from North America, has been shown to have a direct relation with the number of vasopressin receptors in their brains. Similarly, these ignored hairy pals avoid going back to places where they once had a feisty fight. The first-hand quotes from experts and researchers in the said field add to the gravity of these explorations. Bringing to the platter an overall gist of the subject, interesting comparisons with other creatures too have been drawn, wherever needed.

Needless to say, the ongoing scientific researches, as well as projects, have also been spoken of. While some of these throw light on the many successful or ongoing studies on the subject, some give a reality check with the fast-paced acceleration towards the extinction of the species. The conservation projects mentioned draw the reader's attention to the ecological crisis that has only worsened over the years.

One of the projects talked about in the book is “Operation Nest Egg”, a kiwi conservation project by New Zealand's Department of Conservation. These rare birds suffer a great threat from predators at the juvenile stage, resulting in the survival of just 5% of the total hatched chicks. As part of the initiative, eggs of the bird are collected from the wild and are artificially incubated as well as hatched till the time chick reaches the weight of 850 grams.

As far as the hesitation of the readers without a science background is concerned, every effort has been made to serve the scientific explanations in an un-intimidating manner. While some of the terminologies, such as genome, nucleotides, and alleles, may be alien to a layman's dictionary, these have been simplified and are easy to find. Overall, the book is a good start to explore the underlying principles of evolution, and how a living creature functions. For a first-time science reader, the book brings in a whole new perspective. As Lenin would say, “After reading this book, you'll never look at the nature in the same way again.”

Every Creature Has a Story: What Science Reveals about Animal Behaviour

Book Review: Every Creature Has A Story