For those who love witty and humorous content, here we bring you some popular Twinkle Khanna books that you can shop right away. 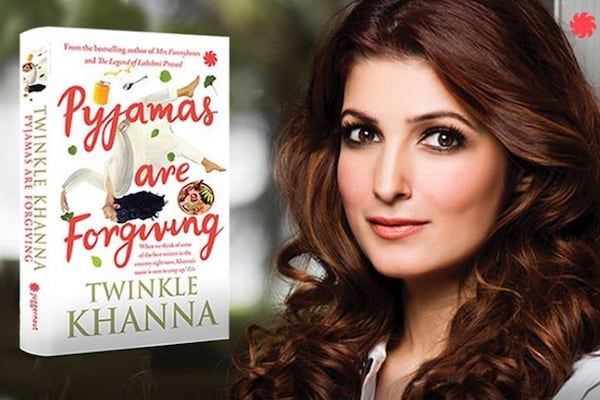 Twinkle Khanna, an author, newspaper columnist, founder of Mrs Funnybones Movies, former film actress and a well-known interior designer. She is humorous, outspoken, witty and one of the most inspiring women in India. The gorgeous wife of Akshay Kumar has her own identity when it comes aspirations and thoughts. Twinkle Khanna is one of India's top-selling female writers. She has emerged as an author after her first book Mrs Funnybones which sold over one hundred thousand copies, which made her India's highest-selling female writer in 2015 and also won the Crossword Book Award 2016 it. She continued the success game with her other books like: The Legend of Lakshmi Prasad (2016) and Pyjamas Are Forgiving (2018) which made her the top-selling female author of 2018. She is also the most read columnists of Times of India who has won multiple awards, that includes: India Today Woman Writer of the Year, Outlook Award for Most Inspiring Woman of the Year and Vogue Opinion Maker of the Year. Twinkle Khanna has also co-produced the famous Pad Man (2018) Hindi movie which was aimed at eradication social taboo and gained lots of praises by the audiences and critics. Let's talk about all the popular books by Twinkle Khanna in detail below.

The Mrs Funnybones book is full of sheer witt and you really need to be awake to understand the humor hidden behind. Twinkle Khanna had brought one of the most relatable family story in India and taking a dig by poking fun. She talks about the husband who's the “man of the house”, the insane mothers in law, friends and those who taking the constant jibes on her weight. Mrs Funnybones is not entirely an autobiography of the author Twinkle Khanna, nor is it typically celebrities write. While reading this you'll understand that the ride of women journey which she goes through who is a mother, an ordinary star and humorous lady who finds humor in every situation. This is what makes it an intriguing read. The author has combined every detail and brought it together to leave the reader roll in cackling laughter. Mrs Funnybones is a funny take on the modern Indian women's life.

The Legend of Lakshmi Prasad by Twinkle Khanna (2016:

The second the list of popular Twinkle Khanna books is The Legend of Lakshmi Prasad. The Legend of Lakshmi Prasad by Twinkle Khanna is a collection of some really magical stories that can make you cry cry, laugh and enchanted. The story is about a young girl who transforms her village with a mutinous idea. After her marriage she wonders that - 'Why do people have to define relationships, underline each word till the paper gives way beneath'. Bablu Tripathi discovers sanitary napkins and becomes obsessed with sanitary napkins and becomes a honor to his family. You must read this book as its funny, observant and wise, the best part is the storytelling which is most irresistible.

The Legend of Lakshmi Prasad

Pyjamas are Forgiving by Twinkle Khanna (2018)

"Pyjamas are Forgiving" book is Set in an Ayurvedic retreat in Kerala and is narrated by a woman named, "Anshu" who is a divorcy and is childless. She heads on to Kerela to spend well-earned break at Ayurvedic Shanthamaaya spa to remove 'Dosha,. Anshu mets a familiar person sismilar to that of her ex-husband who left her for a younger looking girl. The book depicts the delima of a woman who still loves. Grab a copy to know what was the journey of Anshu and what happened next.

Twinkle Khanna has proved her potential in writing by becoming the bestseller in the unexpected time span. We wish her luck and hope for some more book releases in the coming days an years.