Patanjali Ayurved launched Coronil and Swasari on Tuesday claiming that it has successfully cured Covid-19 patients. A 100 percent recovery is what the brand is claiming. Here is what we know about it so far. 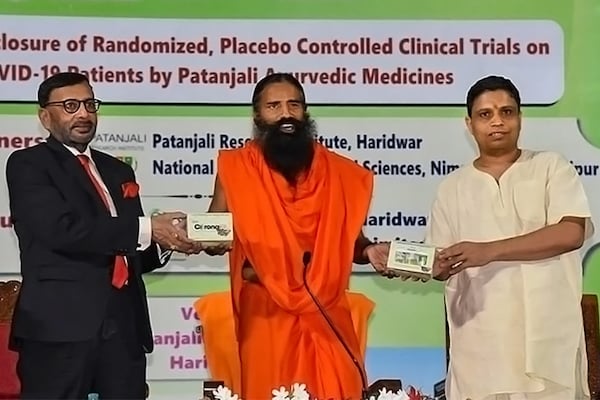 Ramdev's Patanjali Ayurved Ltd on Tuesday released what they are calling a 100 percent cure for Covid-19. However, Ministry of AYUSH has asked for details about the medicine and has directed Patanjali and Ramdev to stop advertising such claims without approvals.

At the launch in Haridwar, Ramdev claimed that ‘Coronil tablet', ‘Swasari Vati' and ‘Anu Taila' have shown “100% favourable results” during clinical trials on Covid-19 patients.

The company is claiming that a clinically controlled study was done in Delhi, Ahmedabad, Meerut and some other cities. During the trial, the yoga claimes, 69 per cent patients recovered in three days, while the recovery rate over a period of seven days was 100 percent.

The Ministry of AYUSH in a statement said, “Facts of the claim and details of the stated scientific study are not known to the Ministry.”

The ministry has also stated that “a warning may be issued and if not complied in one week time, an FIR may be filed in blatant cases of violation”.

Patanjali has been asked to submit details of the sample size, sites and hospitals where the research study was conducted and also for the Institutional Ethics Committee clearance.

Following the release of such news, people across the globe have been searching for Coronil and Patanjali Covid-19 medicine, in surprise as to how this medicine could benefit people infected with the virus.

Patanjali claims that herbal components like – Ashwagandha, Tulsi and Giloy have been used to prepare this medicine that will help people built immunity against respiratory diseases.

This breaking news comes when many scientific methods are being talked about for putting potential drugs through clinical trials to assess their efficacy.

An Indian study indicates that hydroxychloroquine, an inexpensive malaria medicine, can work as a preventive medicine, while a US study indicates that Gilead's Remdesivir works on mild to moderate cases. On another side – Glenmark's Favipiravir is also emerging as a potential Covid-19 drug and has gotten approval from the Drugs Controller General of India.

For the latest deals, offers and news, follow HotDeals360 on Facebook, Twitter, Instagram, Google News and subscribe to our YouTube channel.
The HotDeals360 team writes about stuff we think you'll like. HotDeals360 has affiliate partnerships, so we get a share of the revenue from your purchase.
Topic
Covid-19 cure Coronavirus medicine Covid-19 medicine Patanjali Covid-19 medicine
More From News
Advertisement
Fear of Missing Out Best Deals?
Subscribe to our newsletter. Now!
Recommended
Trending
Latest
Quick Links
Trending
Latest